Items related to Oil, Fire and Fate: The Sinking of the USS Mississinewa...

Michael Mair Oil, Fire and Fate: The Sinking of the USS Mississinewa AO-59 in WWII by Japan's Secret Weapon

Oil, Fire and Fate: The Sinking of the USS Mississinewa AO-59 in WWII by Japan's Secret Weapon 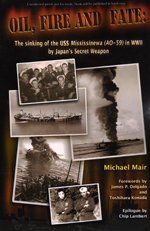 On April 16, 2001 at 12:01h (local time) at the Ulithi Atoll in the Federated States of Micronesia, the USS Mississinewa, the ghost ship of Ulithil Lagoon, is located. This ended an odyssey that began May 18, 1944 when the ship was commissioned. Fifty-seven years earlier the USS Mississinewa had been sunk by Japan's secret weapon. The Japanese Kaiten was an under water craft, designed as a human torpedo and built solely as a suicide weapon. Duty, honor, patriotism, courage, hope and faith. These words inspired countless members of the 20th Century s Greatest Generation who fought for the United States in WWII, the greatest conflict in human history. The author heard the same word from aging Japanese veterans who fought to save Japan from inevitable defeat.

Michael Mair for over a decade spoke to many veterans on both sides as he sought to tell the story of the USS Mississinewa and her sailors including his father, Jack; and Japan s desperate weapon, the Kaiten. Oil, Fire and Fate reveals the compelling story.