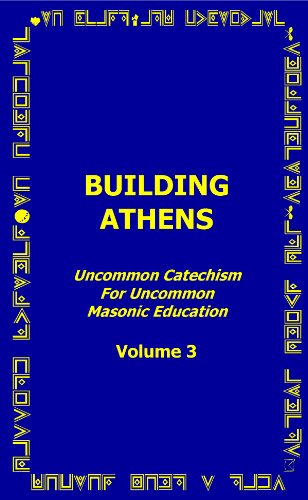 Masons know that the Seven Liberal Arts and Sciences are important to study. What some don t know is why it is so critical for them to study them.
In Building Athens, volume three of the Uncommon Catechism for Uncommon Masonic Education series, Dr. Nagy shares 12 intriguing and enlightening Masonic Catechisms that outline in depth the very purpose and core of the Fellow Craft education. Well established nearly 2500 years ago, the training serving this purpose Raises Masons with a specific end in mind.
Dr. Nagy s book reveals:
* The author of and inspiration for Fellow Craft Training.
* The purpose Fellow Craft training was intended to accomplish.
* The single most important word that denotes the difference between Fellow Crafts and Master Masons.
* A widow s son whose life and death redefined what it means to be heroic.
* What should be known about the Seven Liberal Arts and Sciences by every Mason.
* What truly Raises a Fellow Craft toward Mastery.
Dr. Nagy provides you with yet one more interesting and thought-provoking guide to improve and strengthen your Masonic awareness and clarity. He shares key information and insights that will help you better understand how facets of the second Degree fit together to help you in your Building efforts.

Professional Background: Rev. Dr. Coach John S. Nagy is a multi degree Professional Business/Life Coach and Technical Advisor who provides Coaching support to business professionals internationally. John has been in the Coaching field since January 1989, running his own Coaching practice since that time.
Coach Nagy has a Bachelor of Science in Electrical Engineering (BSEE), a Master of Science in Engineering Management (MSEM) and a Doctor of Ministry (D. Min.). Along with his three degrees, John is also a Graduate of Coach U. This innovative school, started in the early 1990's, trains Coaches world wide in the fine art and science of personal and professional coaching.
John is also a well-recognized State Certified County Mediator in Florida. He both mediates court ordered cases in the 13th Judicial Circuit of Hillsborough County part time and trains fellow mediators throughout the state. His experience in this field has helped many clients craft agreements and systems that take into account default conditions and helps prepare those he serves to better negotiate contracts with their internal and external clients.
Coach Nagy is a published author since the early 1990's, writing and publishing many articles, books and booklets on personal and professional development. Most recognized are his writings on business and personal development, management effectiveness, communications and critical thinking.
John is also known nationally as a speaker and trainer on a wide variety of subjects related to business and personal development. He has been actively engaged in teaching activities since 1982.
Masonic Background: Brother Nagy Entered into Freemasonry in 2001. Having been Prepared in his heart for many years before Entering, he quickly embraced the Tenants of Freemasonry and engaged in several Lodge support activities while learning what he could about the Craft. Brother John steadily progressed through the Symbolic Degrees, earned his White Lambskin Apron and proceeded to support Lodge Degree activities.
Immediately following his initial experiences of the Junior Warden s chair, he found himself migrating toward providing Music for Lodge Communications and Degrees along with providing continuing Masonic Education as his expressed Masonic passions. His offerings were favorably noticed and because he provided a wide variety of Masonic Education pieces, his Lodge Brothers encouraged him to consolidate his Work into a book that could be shared with Brothers around the world. That effort was eventually named Building Hiram Uncommon Catechism for Uncommon Masonic Education Volume 1. With its successful creation, publication and distribution, Volumes 2, 3 and 4, quickly followed Volume 1. Those volumes are now collectively referred to as The Building Series.
In between his research, writing and publication of these books, John also co-authored another book, Lifting the Veil Esoteric Masonic Thought , a collection of esoteric Masonic writings by Masonic authors from around the world. Additionally, Brother Nagy has published numerous Masonic Education articles that have appeared in Further Light Magazine , Lodgeroom International Magazine, The Working Tools Magazine and on his Masonic Web-log, Building Builders. He has been interviewed live on several webcasts (Masonic Central, Freemason Information) on his Works. He is currently featured as one of the Intenders on the Worldwide Exemplification of Freemasonry project supported by the Grand Lodge of Indiana. That feature is called, "The Coaches Coach: Building Builders", and it is based on the research behind his Building Series of Masonic Education books.
Upon request, Brother Nagy facilitates Masonic Education Workshops based upon his research and writings.

Building Athens Book Review By K. Kidd
Bro John Nagy, so quick on the heels of his "Building Boaz" and "Building Hiram", recently released a third volume of Masonic catechism, "Building Athens". In this one, well aligned with the Fellow Craft Degree, we get a greater sense of what Bro Nagy means by "Building".
This is far more than the usual Seven Liberal Arts and Sciences students of Masonry think about in the Second Degree. In Building Athens , Nagy provides 12 in depth and thought provoking catechisms that call to mind the purpose of education in this degree.
Like the first two volumes, "Building Athens" invites us to ask questions and answer them. As in both modern and not so modern Masonic catechisms, Nagy invites the inquisitor and respondent to think about what they utter or internally contemplate. Here is but one such exchange which, interestingly, has more statements than questions. Note his use of capitalization:
The Claim
I: You have Claimed to be a Fellow Craft Mason.
R: Yes, I have.
I: Present your Argument and prove your Claim.
R: My Brothers are Fellow Craft Masons; I was Passed in a duly convened Fellow Craft Lodge and my Brother Masons recognize me as a Fellow Craft Mason; therefore, I am what I Claim to be, a Fellow Craft Mason.
I: What s more?
R: Through study, I have developed the ability to discern Truth from fallacy by cultivating and employing specific Shibboleths to do so.
I: What s further?
R: Understanding, cultivating and employing Logical Shibboleths are signs of Fellow Craft Mastery.
In this passage, I m much taken with the only two questions, What s more and What s further . The respondent is so invited to define more and further , something many never approach.
Bro Nagy also gives us a few more glimpses into his own building, thru his own formative experiences. My favorite in Building Athens is on page 33, where Bro Nagy reminds us it all begins with a Word.
Pablo Picasso created a painting called Guernica in 1937. Forty-one years later, a copy of it made its way into a Liberal Arts class with me as one of the students.
The teacher presented it as a focus of an exercise that day. The task was for us to evaluate it and share our thoughts. Not knowing anything about the painting, the time it was created or the culture that influenced it, I was utterly bored with it. It had no meaning to me whatsoever.
After we stared at it for a few minutes, the teacher asked the class members to share their thoughts. Without much variation, I learned that my fellow students had similar reactions to this picture.
The teacher smiled and proceeded to let the class know who painted it, the reason for its creation, the period and the background of the culture that influenced it. He then pointed to specific items within the picture and shared what each was communicating. As he continued his lesson, I learned how seemingly simple pictures could represent profound and deeply moving ideas, notions, concepts, points and realities.
In those moments, my world changed. I went from a disinterested blind man to an engaged, sighted soul.
Readers are likely to find more than a few such moments in Building Athens . I believe this book would be an excellent addition to the too often sparse Lodge Fellow Craft study material and would make an excellent gift for a newly Passed Mason. --K. Kidd