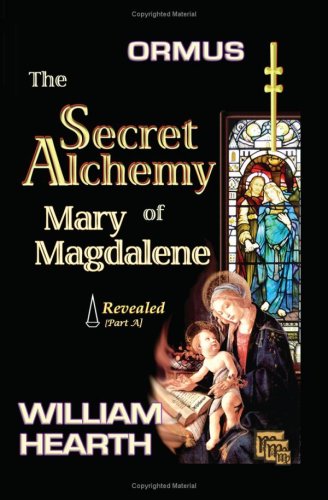 Mary Magdalene's Secret Alchemy Revealed~ "Hearth wastes no time getting straight to the heart of the matter: a compelling introductory work to his new novel, "ORMUS The Secret Alchemy of Mary Magdalene." .... "A MUST READ for anyone interested in the secret truth behind Mary Magdalene, TEMPLAR executions, ESSENE mystery schools & the persecutions of Magdalene's family & constituency." .... "A NO NONSENSE primer for those awaiting the greatly anticipated novel from newly acclaimed author William Hearth" .... "Was JUDAS a favorite disciple of Mary's? Was he framed by Saul of Tarsus?" .... "The Secret Alchemy of Mary Magdalene will enthrall, educate & elucidate" .... "A collectors item" .... "If you love Mary Magdalene & everything she stands for, this is a must-read, must-own." .... Mary Magdalene & Cleopatra's MFKTZ...ORMUS, What is it? ..... The first of two introductory works to a 5 part series: WILLIAM HEARTH'S new Block Buster.

From the Author: From the Back Cover:

I.N.R.I. For the Druidic Initiates, Hebrew Kabalists and Egypto-Arabic Alchemists (and in other esoteric societies) I.N.R.I. might have looked a bit more like this:

Igne nitrum raris invenitur.To the unenlightened, I.N.R.I. may have appeared as King of the Jews. But in Christ's own words... "You have eyes but you don't see. You have ears but you don't hear."