Items related to The Scale Viper, A Modeler's Guide to Building...

Pete Fleischmann The Scale Viper, A Modeler's Guide to Building the F-16

The Scale Viper, A Modeler's Guide to Building the F-16 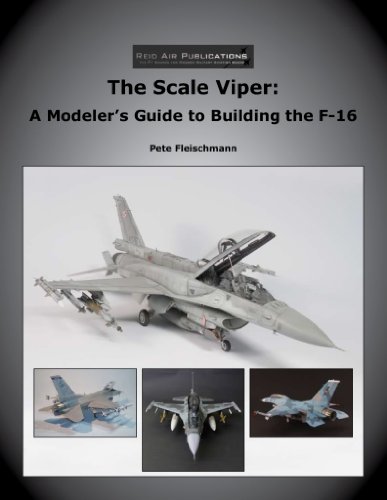 Featuring 104 pages of tips and techniques to help any model builder perfect his F-16 replica, this book was written by a former F-16 pilot to help other modelers learn the intracacies of the Viper in model form. The author is known the world over for his talents when it comes to model building, and now his tricks are in book form! Included is a section on painting/weathering, understanding reference material as it pertains to the F-16 (Viper FAQ), an F-16 kit round-up of available kits, and models built by other modelers in all three common scales to show what can be done with any kit in the right hands.

Pete Fleischmann is a former F-16 pilot, serving with the USAF and Air National Guard until recently. Having flown combat missions in the Viper over Iraq, he now finds himself at the controls for a major airline.

Different modeling books tend to have a tool round-up in their introduction chapter. This book includes which probably is the more important tool; the modeler's eye . What is meant here is that you have to study the subject, look at it several times, noticing details each time in order to take notes and attempt to recreate whatever you see when you are looking at pictures or the real thing you are planning to model. The following chapter briefly covers the basic techniques of model weathering, and then the book dives into very well photographed and highly detailed construction of 11 models, ranging from 1/32nd to 1/72nd scale. Markings range from USAF, to Chilenean and Israeli Air Forces. This book does not cover the basic assembly or finishing techniques (it is assumed the reader has a basic knowledge to modeling techniques). Instead it focuses on conversion (where appropriate) and detailing to assemble the correct Block for the model that is being built. Not all the models in this book have been built by the same modeler, but all of them are F-16s. The variety of modelers adds interest to the book, as you find different approaches on the same subject. To wrap up the book, the last chapter includes a kit round up , listing all the modern kits for F-16s, from 1/32 to 1/72 scale, including the high and low points of each kit and what other blocks could be built with the parts included in the box. Pete Fleischmann is not just a modeler, but also a former F-16 pilot. His deep knowledge and passion for the subject is found through the book. This book is recommended for all aviation modelers and in particular for those planning to build several F-16s for their collection. --International Plastic Modelers Society USA

The Scale Viper guide is an excellent book on building any F-16, in any scale. The first part of the book outlines generic modeling aspects as well as covering the F-16 overall. Once past the Introduction, the first section, The Modeler's Eye, discusses modeling in general - how one needs to see a model in regards to its real life counterpart. It mentions such things as writing all steps needed to complete your model in some form. That way you have something to refer to as you proceed with the build. The next section, The Basic Dance Steps of Painting and Finishing is further broken out into Pre-Shade, Paint, Gloss Coat, Wash, Flat Coat, Dry Brush and Detail Paint. It provides hints and tips in all these sections on how to finish your model to a high degree. In the section Moving from Scale to Scale: Scale Conversions Made Easy, it discusses how one can use copiers to scale up-or-down drawings (be aware, though: copiers aren't 100% accurate with their "scaling"; one dimension can be off; plus, most drawings are not 100% accurate, when you factor in the reference material's printing method). The Scale to Scale section also mentions using scale rulers which is a good idea. One of the meatier sections is Viper Frequently Asked Questions. In it you'll find the answers to questions such as what the differences are from block-to-block (that is, how a Block 30 F-16C is different from a Block 42 F-16C). You'll also find answers to what makes a machine a CCIP/CUPID versus one that didn't receive those upgrades. This will definitely help when you finally decide on a specific F-16 and pouring over original photographs and descriptions, come across some of these terms as applied to the airframe you want to build. Finally, the rest of the book deals with specific model builds. The first is a Tamiya 1/32 Block 52+ F-16D conversion built by the author. The next build is also by the author, this time building the 1/32 Tamiya kit into a Block 42 F-16C. The next build is by Oishi and it's his take on the 1/32 Academy F-16C Block 40 built as an Isreali Barak. The final 1/32 build is by Guy Wilson and his build of the Tamiya kit into a Block 50 F-16C. The next scale in the book is 1/48, and the first is a build of the Tamiya kit by Jin Yi Ming, and his build of a Block 30 "Artic Aggressor". The next 1/48 Tamiya build is of a Peace Puma Block 50 F-16C built by Jens Brandel. Another Tamiya kit build is next, this time of a Chilean Block 50 F-16D built by Pavel Smetana. The next 1/48 build is by Geoff Martin, and he builds two models, both Tamiya kits. The first is a Block 40 F-16C and the second a Block 25 F-16C. Finally the last 1/48 build is of a Block 15 F-16B, this time using the Hasegawa kit, and built by Jeff Thompson. Finally the book is into 1/72 scale. The first is a Block 30 "backdate" using the Revell Block 50. This one is a Hellenic machine built by Pavol Villinsky. The next - and last - 1/72 build is another Revell kit, this time the F-16B Block 1 of the RNoAF. All builds contain text on how they not only built and finished the kit, but also any modifications, if necessary, and also any aftermaket used. Even if not your scale, each build article is a good read, if for nothing else but to see how other modelers tackle problems and finish their kits. Finally, the book finishes with a section outlining all known kits in three scales (1/32, 1/48 and 1/72) and discussing pluses and minuses to all. --Internet Modeler

1. The Scale Viper, A Modeler's Guide to Building the F-16

2. The Scale Viper, A Modeler's Guide to Building the F-16