Items related to Who Killed Andrei Warhol: The American Diary of a Soviet...

Who Killed Andrei Warhol: The American Diary of a Soviet Journalist by Oleksandr Ivanov 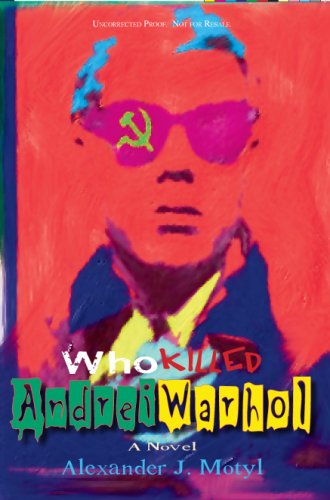 Who Killed Andrei Warhol is an absurdist tragicomedy that imagines and explores a friendship between pop artist Andy Warhol and a straight-laced orthodox Communist, a Soviet Ukrainian journalist who arrives in New York early in 1968 to cover the impending American Revolution. Written in the form of a diary, Who Killed Andrei Warhol begins at the height of New York's garbage strike and ends dramatically on the day of Valerie Solanas's attempted killing of Warhol.

Alexander J. Motyl, a native New Yorker, is a writer, painter, and academic. He is the author of Whiskey Priest and professor of political science at Rutgers University-Newark. His art is represented by The Tori Collection

Book Description Seven Locks Press. Paperback. Condition: Very Good. A copy that has been read, but remains in excellent condition. Pages are intact and are not marred by notes or highlighting, but may contain a neat previous owner name. The spine remains undamaged. At ThriftBooks, our motto is: Read More, Spend Less. Seller Inventory # G0979585201I4N00

2. Who Killed Andrei Warhol: The American Diary of a Soviet Journalist by Oleksandr Ivanov

Book Description Seven Locks Pr, 2007. Condition: Good. A+ Customer service! Satisfaction Guaranteed! Book is in Used-Good condition. Pages and cover are clean and intact. Used items may not include supplementary materials such as CDs or access codes. May show signs of minor shelf wear and contain limited notes and highlighting. Seller Inventory # 0979585201-2-4

3. Who Killed Andrei Warhol: The American Diary of a Soviet Journalist by Oleksandr Ivanov