Items related to The Eye of Icarus

D'Ambrosio, Michael The Eye of Icarus

The Eye of Icarus 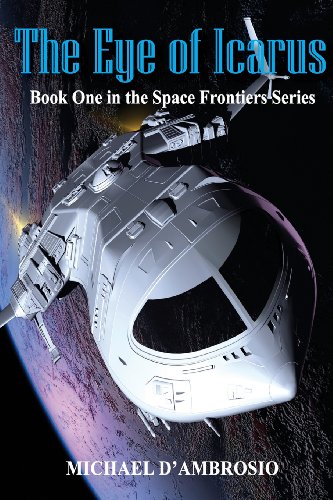 Will Saris, an ambitious and young officer in the Space Fleet, embarks on his first mission alone with one directive - be discrete. He disobeys that directive and sets off a chain of events that not only change his life but much of the universe as well. The Eye of Icarus, book one in the Space Frontiers Series, starts off with edge-of-the-seat action, heart-throbbing romance, and chilling suspense where Will Saris goes from a rookie Officer and boy to a mature master manipulator of the alien races. The Eye of Icarus is the long awaited follow-up to D'Ambrosio's Fractured Time Trilogy as Will Saris, son of Fractured Time's Billy Brock, proves to be much like his father as he weaves his own thrilling and romantic adventures in a hostile universe.

When I started Space Frontiers, this was meant to be an adventure in space with young characters getting into all kinds of trouble. What I didn't plan for was the ethical issues that I inadvertently included in the series. During an interview with the host of an LA radio station, it was pointed out to me that this oversight made the series ideal for young adults as well as older readers because the characters had to address these issues. Those scenes portrayed the emotion and complications that arise with issues like unplanned pregnancy and how it affected the characters' relationship as well as their mission. This series has become more popular than I ever imagined.

Will Saris, a young officer in the Space Fleet, wages his own war with the alien alliance. In disobeying his commander's orders, he is thrust into a fast lane of adventure, romance, horror, and worst of all, responsibility.

1. The Eye of Icarus

Book Description Helm Publishing. Paperback. Condition: Good. A copy that has been read, but remains in clean condition. All pages are intact, and the cover is intact. The spine may show signs of wear. Pages can include limited notes and highlighting, and the copy can include previous owner inscriptions. At ThriftBooks, our motto is: Read More, Spend Less. Seller Inventory # G0980178029I3N00

2. The Eye of Icarus

Book Description Helm Publishing, 2008. Condition: Good. A+ Customer service! Satisfaction Guaranteed! Book is in Used-Good condition. Pages and cover are clean and intact. Used items may not include supplementary materials such as CDs or access codes. May show signs of minor shelf wear and contain limited notes and highlighting. Seller Inventory # 0980178029-2-4

3. The Eye of Icarus

4. The Eye of Icarus

5. The Eye of Icarus