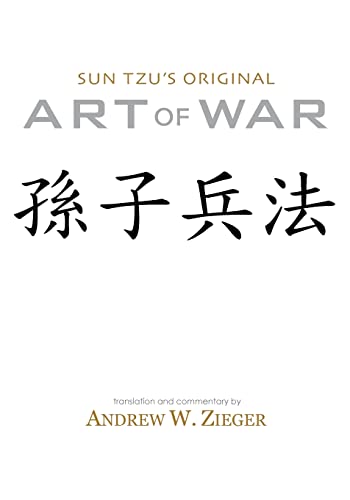 This special bilingual edition of Sun Tzu's Original Art of War uses the best of archaeological and academic research to recover the original Chinese text and faithfully recreate it in English, eschewing the unnecessary wordiness and inaccurate abstractions that mar other English translations. Beautifully adorned with the original Chinese text, critics agree: Sun Tzu's Original Art of War brings the modern English reader as close as possible to experiencing Sun Tzu as his readers first did some 2500 years ago -- revealing the vivid, clear and simple military text Sun Tzu intended.  Whether it's for the boardroom, the battlefield or cultural study, Sun Tzu's Original Art of War makes the brilliance of Sun Tzu plain for all to see.

HIGH PRAISE
"Unlike most of the more wordy and interpretive translations of the Sun Tzu, Andrew Zieger gives us a unique bare bones rendering of this canonical text--a series of word pictures--that, in applying his own image-to-image technique, captures the poetically laconic force of the original."
-Roger T. Ames, leading scholar in ancient Chinese literature

SEEKING the ORIGINAL
When reading the Sun Tzu in the original Chinese, one is struck by how it uses everyday expressions, ordinary images and commonplace concepts to articulate complex military principles.

Most other English versions of the Sun Tzu -- in addition to complicating the text with undue abstractions -- pay little heed to the structure and imagery Sun Tzu used to make the Art of War one of the most beautiful works ever written.

This translation was commissioned to translator Andrew W. Zieger and his team to create an English text that accurately captures the beauty, simplicity and wisdom of the original Art of War.

VALIDATING the PROCESS
Unearthing the true Sun Tzu involved two key steps: first, verifying that the Chinese manuscript faithfully and accurately reflected the original Art of War; and second, that the English translation literally and authentically rendered the original Chinese.

By compiling and comparing the most trusted competing Chinese manuscripts with the latest archaeological and scholarly developments, we were able to distill what we believe to be the most uncontaminated version of the Chinese manuscript in existence.

Further, by painstakingly rendering that Chinese text into English using the same words, images and structures as Sun Tzu, we avoided the tendency of most other popular translations to re-phrase Sun Tzu rather than translate him.

RECOVERING the AUTHENTIC SUN TZU
The most common shortcoming in earlier translations of the Art of War is the practice of re-phrasing -- instead of translating -- the original Chinese.

For example, the Chinese character for "anger" (怒) -- a very simple and common Character in Chinese -- occurs 7 times in the text. Our translator was careful to honour the simplicity of the Chinese image, translating the character as "anger" five times and "angry" twice; the widely published Lionel Giles translation, however, twice inexplicably translates the character as "of choleric temper" and "to gratify his own spleen", polluting Sun Tzu's voice, and giving the text a haughtiness that simply does not match the ethereal tone of the original Chinese text.

By carefully emulating the start simplicity of the Chinese, our translator has been able to recover the original voice of Sun Tzu for the modern English reader to experience.

the TRANSLATOR
Translator Andrew W. Zieger was commissioned for this project to create a accurate, clear and beautiful representation of the original Chinese text.

His years of professional and academic experience have made him an expert in CJK translation and have placed him on the cutting edge of translation theory.

ABOUT the ORIGINAL SUN TZU
The legendary Chinese general, apparently born into a family of moderate nobility, most likely wrote the world's first treatise on military strategy between 400 and 320 BC. Since then, the brilliance of his principles have been applied from Desert Storm to the World Series of Poker, his work becoming one of most influential and cherished texts the world has seen.

There is a somewhat shocking variety of Chinese texts of the Art of War in circulation. As with most ancient texts, there is some dispute as to which version is the most accurate, and a great deal of dispute about the inclusion, exclusion, and wording of certain passages.

While the choice of Chinese text used for this translation depended heavily the work of scholars and experts in the field, we were not distracted from keeping our focus on the voice of Sun Tzu. Accordingly, we determined it better to exclude something Sun Tzu said than include something he did not say: if two or more major versions disputed a passage, lacking convincing evidence one way or the other, almost without exception the shorter passage was chosen.

There are several theories of how the Art of War came to be written. Some suggest that what Sun Tzu wrote was compiled from oral tradition, and some even go so far as to suggest that Sun Tzu did not exist at all as a historical figure. Our Chinese text is primarily based on the three main versions in circulation: "The Complete Specialist Focus", "The Military Bible and The Complete Version of Sun Tzu's Art of War". Certain phrases were also adjusted according to the special considerations based on the latest archeological discoveries. Especially notable is the Yin-ch'ueh-shan Committee's 1985 reconstruction of the text, with helpful illumination on that reconstruction in Roger T. Ames 1988 translation "The Art of Warfare".