Items related to Nancy Ward: Military and Genealogical Records of the... 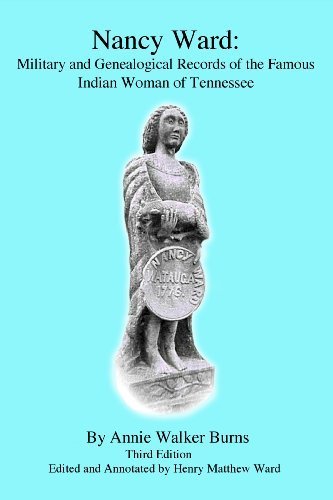 Nancy Ward: Military and Genealogical Records of the Famous Indian Woman of Tennessee Nancy Ward (Nanye-hi...[One Who Goes About] c. 1738-1824) was the most famous of Cherokee women. She held the title of Ghigau or Beloved Woman. This entitled her to sit on council meetings with the chiefs and to commute the sentence of any prisoner. She "married" a white trader named Bryant Ward with whom she had a daughter, Elizabeth, who later married the British General Joseph Martin. Many descendants in the Cherokee nation spring from this union. Bryant Ward had a son from his previous union with a white wife. This son, John (Jack), came looking for his father among the Cherokee and ended up living with them and marrying another Cherokee woman who bore him children who also became prominent in the Cherokee Nation. This book, written in 1957 by Annie Walker Burns, originally was done in mimeograph with only about 100 copies ever printed. The book documents many of the legends of Nancy Ward and also corrects some misconceptions about her. Her descendants are traced in some detail. Stories are quoted from other sources contemporary with the individuals mentioned. The new edition, edited by Henry Matthew Ward, was retyped to correct many typographical errors and difficult to read syntax. At the same time, he added many footnotes to explain where places mentioned in the book were actually located and the significance of certain individuals appearing in the original book. It was also done to make the book more widely accessible. The new edition is 6 x 9 soft cover with 294 pages and contains an index of all names mentioned in the book (approximately 1750).