Items related to What Sex is a Republican?

Terri McCormick What Sex is a Republican?

What Sex is a Republican? 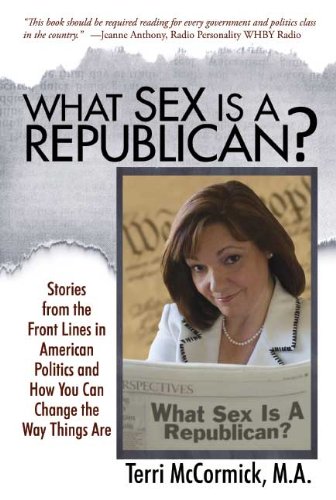 What Sex Is a Republican? takes a look at the political game from behind the curtain with one intention: to call on each of us to serve in our local, state and federal governments. The principles of republican government have been lost on the money changers in our state and national capitols. There is only one way to change that. We the people must take responsibility for what our government has become while we weren't looking.

Terri McCormick is a public policy and leadership innovator. She is the President of the McCormick Dawson CPG, Ltd., a marketing and public relations firm. Terri McCormick was a State Representative to the Wisconsin Legislature from 2000 to 2006. She is a Wisconsin Truman Scholar. She lives in Appleton, Wisconsin.

This book is a mixed bag of the personal recollections of a former politician and continuing activist held together by the theme of populism and grass roots activism. It also attempts to provide some guidance in the related arts of running for political office and building a reform movement. This sort of political memoir is fairly common, but this book is unique in this genre in that it actually contains significant and original ideas on politics and governance. McCormick from all appearances is an idealist who maintains that fast disappearing conviction that the first loyalty of any elective official ought to be to constituents not to party. She is a republican and a conservative, but more in the manner of Thomas Jefferson than Karl Rove. Her political philosophy closer to the center than that of libertarian republican Ron Paul, but she clearly would be comfortable with many of his ideas. Like Paul she believes that the U.S. Constitution is the definitive blueprint to governance in the U.S. rather than a "living document" containing broad and often ambiguous advice. She is a conservative thinker, but not an ideologue. She is a critic of the duopoly (Republican/Democratic) hold on power in the state and national legislatures, the tyranny of party over principal, and the focus of both parties on maintaining power in the hands of the select and keeping the status quo. McCormick's stories of are depressing indeed. It is encouraging however that McCormick, at least in this book, is a strong advocate for integrity on the part of politicians, the media, and most importantly the electorate. She appears a strong advocate for real fiscal responsibility, educational reform, and an engaged electorate. These are positions only the duopoly could argue with. --Amazon

So okay, I am the perfect person to do a review of this book. I am, ahem, a Republican, not that I'm necessarily proud of this. I wrote a book, hand to God, titled "Republican Sex" although I have not published the thing. My book, however, is an R-rated affair, fiction, with a helluva plot and a good story but let's not go there. When I saw this book up for review I decided it was good for me. I am nothing like this book's author, either. As the book's cover asserts: " Terri McCormick,M.A.-is a public policy and leadership innovator. She was a State Rep to the Wisconsin legislature from 2000to 2006." I am a common Blogger. Here's what Terri McCormick has to say about Bloggers, from the book: "Realize that bloggers represent their own interests and are not credible, reliable or subject to the ethics code below" The little bit of bemused justice here is that this Blogger of her own interests gets to review might Terri McCormick....M.A.(why is this part of her author's title?) Which is not to say I did not enjoy the book. In fact I did enjoy the read, I found McCormick's observations and experiences to be right on, I consider this book a must read for a certain sort of individual, more on this later. Let's begin with the title. It makes no sense at all and has little to do with the book's contents. McCormick does write almost exclusively about the Republican party and by me she's got the party mentality, issues and problems nailed dead on. But it has nothing whatsoever to do with sex. Methinks Ms. McCormick was trying to attract a salacious sort of attention to her offering, a salacious attention that MY book should, without misleading anyone, attract. Not that my book's published or anything but we've already dealt with that. I'd be too embarrassed to publish my book for the sex scenes but maybe someday, under a pseudonym. McCormick guides the reader through her story of entry into the political scene, through her trials, and tribulations, in the Wisconsin state legislature. She does give some background of her life, tales of her parents, their story. This book is not, however, a book written by someone who sees his or her self as a future candidate. Two things make this not the case. First, Terri McCormick now runs a political consulting firm and leads to the next conclusion that this is not a "meet the candidate" tome...specifically the way it is written. For rather than getting up close and cuddly with the reader, McCormick writes to an audience learning the political ropes. In fact, this book is written exactly as if for a Political Science course. It has bolded chapter topics, bulleted chapter conclusions, inspirational quotes to begin the chapter and summaries at each chapter's end. Thus it is hardly the stuff one would take along to the beach. It is, however, a great insight to political machinations. There are morals to each story. There are great hurrahs and ways to overcome and at times one can almost hear the Battle Hymn of the Republic faintly in the background during the read. I offer that this is a good thing. I admire Terri McCormick, how she had an idea, how she stuck to her guns. I admire this book which exhorts those with similar ideals should carry on, HOW they should carry on, WHY they must carry on. It's not a Pollyanna world, as McCormick readily explains. Her verbally graphical explanation of the "front row" versus the "back row" as well as her run-ins with her nemesis, the "speaker" in the Wisconsin legislature, make clear that there are obstacles but obstacles can be overcome. It's a perfect book for a novice political activist. A Tea Partier, for example. Buy the book. Read it before the upcoming November elections. Read it before throwing YOUR hat in the political ring. --Amazon

In the modern, polarized atmosphere between the political parties, books that describe political dirty tricks and their consequences are routine. What is extremely unusual about this one is that the author was a Republican in the Wisconsin state legislature and her fellow Republicans executed the tricks that were played on her. McCormick chronicles a sad and disgraceful situation where the Republican front row political elements (and some Democrats) played a cynical game where the order of importance was: 1) Self 2) Party 3) Constituents, as long as this did not conflict with (1) and (2). This book has almost everything you do not want to read about in a political book. There is collusion between the political figures and selected industries to thwart badly needed attempts to protect the environment, manipulations of programs designed to provide jobs so that they enrich certain elements and create few new jobs and the actions of the teacher's union to prevent educational reform. National figures in the Republican Party also intervene in the Republican primary process in an attempt to prevent the maverick McCormick from winning the nomination to a seat in the House of Representatives. In summary, if you follow politics and are watching how figures such as Florida Governor Charlie Crist are being drummed out of the Republican Party in favor of units more amenable to following the party line, then there is little here that will surprise you. So much of what has made America great is being lost as both political parties are now concentrating on maintenance of the status quo and their own positions of power. McCormick is a rational, moderate Republican, the kind that the party now has little room for. Her story is one all aspiring political reformers should read. --Amazon

1. What Sex is a Republican?

2. What Sex is a Republican?