Items related to 50 Ways You Can Help Obama Change America 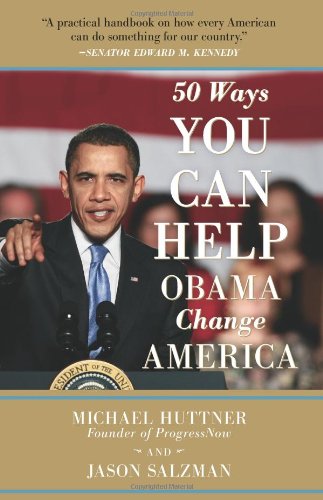 Millions of Americans worked hard to elect Barack Obama. Now they're asking themselves, What's next? How do we keep the momentum going? 50 Simple Ways You Can Help Obama Change America describes actions citizens can take to clean up the mess, enact Obama's core campaign promises, and move the country forward.

"In 50 Ways You Can Help Obama Change America, Michael Huttner and Jason Salzman have given us a practical handbook on how every American can do something for our country. This book should be required reading for anyone interested in making a difference and helping President Obama get our nation back on track."
--Senator Edward M. Kennedy

"The historic election of President Obama marks a new chapter in American history, but it's only the beginning. This book offers every American straightforward ways to help bring real, lasting change."
--Congress Woman Donna F. Edwards

"This up-to-date guide for the hands-on activist is a must-have blueprint for every supporter who answered Barack Obama's phrase, `Fired up,' with `Ready to go!"
--Markos Moulitsas Zúniga, Founder, Daily Kos

"Obama is an opportunity, not our solution. He'll succeed in Washington only if we the people get organized, hit the streets, and demand change. This book explains how you can do your part."
--Ben Cohen, Co-Founder, Ben and Jerry's

"The last election was merely a first step. We must now bring that same enthusiasm and determination to bear in order to get our country back on the right track. This book is a road map for anyone looking to make a difference."
--Senator Russ Feingold

"Electing Barack Obama to the presidency is the beginning of the journey, not the end. The real agenda is not to have a Democrat in the White House but to give ordinary Americans some say again. Huttner and Salzman show how we can do that."
--Governor Howard Dean

"Barack Obama made public service `cool.' 50 Ways will help make it effective. Whatever your personal call to service, 50 Ways has the resources you need to make a difference."
--Christine Pelosi, Campaign Boot Camp:  Basic Training for Future Leaders

"During his campaign, Obama empowered all of us to take part in initiating change, and it's imperative that we keep that momentum going by involving the next generation. This book is a great resource to encourage young people to embrace their civic responsibilities."
--Jessica Alba

"The 2008 election promised change, but achieving it means actively helping President Obama champion a progressive agenda. This book is a road map. Use it to help the president make that agenda a reality."
--David Sirota, The Uprising: An Unauthorized Tour of the  Populist Revolt Scaring Wall Street and Washington

"If you were one of the 69,492,376 Americans who voted for Barack Obama, your work has just begun. Huttner and Salzman envision 50 practical steps you can take to revive our economy, reclaim our environment, and renew our democracy."
--Paul Begala, CNN Political Analyst

"Obama's presidency has laid the foundation for enormous change, but change is not possible without the support of the American people. This book provides a blueprint to build a cleaner, healthier, and more economically just future for all."
--Phaedra Ellis-Lamkins, CEO, Green For All

"I've witnessed the success of many of these strategies used by Huttner and Salzman in Colorado. Now they are sharing their wisdom with the entire country."
--Congressman Jared Polis

"Obama's election proved that Americans from all backgrounds can work together to defy the odds and make history. Huttner and Salzman show us how to capitalize on that first step toward reclaiming America."
--Maria Teresa Kumar, Executive Director, Voto Latino

Michael Huttner is the Executive director of ProgressNow and ProgressNowAction in Denver, Colorado. He is adjunct professor of law at the University of Denver, where he teaches legislation and lobbying. He has served as private political consultant and a policy advisor to Governor Roy Romer.