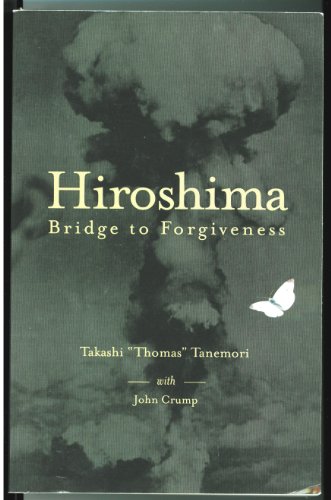 Hiroshima: Bridge to Forgiveness tells of the journey of Takashi Tanemori, son of a Samurai, from postwar Hiroshima's ashes to new life and purpose in America. On August 6th, 1945, Takashi, then eight years old, was less than one mile from ground zero when the atomic bomb exploded, ultimately claiming his parents and two siblings. Before Takashi's father died he asked his son to live his life as he had been taught - - teaching his children the lessons learned from his parents, the Code of the Samurai. Above all, Takashi should be true to himself and to live for the benefit of others. In his misery, the young boy vowed to avenge his father's death. Orphaned, Takashi was rejected in his homeland, surviving as a 'street urchin', until immigrating to the United States. There, Takashi worked in California's 'salad bowl', and suffered as a captive patient in the state's psychiatric system. A nurse cared for him, became his guardian, and sparked the young man to serve others through Christianity. Takashi worked for two decades as a spiritual guide and builder of congregations. But, unable to conquer prejudice in churches, Takashi turned to reach the hearts of Americans through their stomachs, as a restaurant entrepreneur. An epiphany led Takashi to reject his vow of revenge and devote himself to fostering forgiveness. He set a lifetime goal of helping future generations live in Heiwa - - peace, with harmony and equality. In 2005, sixty years after the bombing of Hiroshima, Takashi returned to his childhood home to reflect on his life's path in light of what history has taught us, and most importantly, to reconcile a six-decade long relationship rift with his older sister. Takashi Tanemori founded the nonprofit Silkworm Peace Institute, dedicated to international peace, and today he works to promote forgiveness and peace.

Book Description TVP, 2008. Paperback. Condition: VERY GOOD. Pages are intact and are not marred by notes or highlighting, but may contain a neat previous owner name. The spine remains undamaged. Seller Inventory # 0981753205_abe_vg

2. Hiroshima: Bridge to Foregiveness. (Signed by both)

Book Description TVP, San Jose, CA, 2008. Wraps, Trade Paper Back. Condition: As New. Second Edition. Signed by the author in ink then his chop in red, then signed by the editor on first page. 507 pages. Pictures on request. Signed by Authors. Seller Inventory # 001030