Items related to An Island Cabin 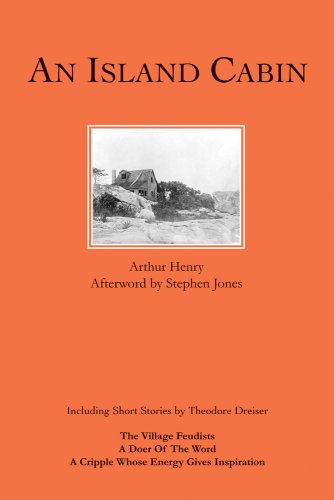 In reaction to the burgeoning industrial blight of late 19th century America, the author flees from the big city with a scheme to write a book. It is to be about idyllic life on a small island off the coast of Eastern Connecticut. He finagles a tiny piece of land surrounded by water and hires a local hotel keeper/carpenter to construct a small two-story cabin. To transport him back and forth from the fishing shipbuilding village of Noank, he finds a local rigger to knock together a little sailing skiff. The potential for this Thoreauvian plan begins to fray, however, when he invites two women. Neither is the wife or daughter he has left back in the Midwest. All seems well until arrives another guest and his wife and maid. The restless man whom he here calls Tom is in reality nonetheless than the future great of American letters, Theodore Dreiser. To add to the mix Arthur Henry imports three Noank cats.

The original text, published in 1902 as part of a lifestyle trilogy, is entertaining enough in its own right, but this Flat Hammock Press edition adds Stephen Jones' in-the-footsteps, back-story narrative of what happened before, after and even more surprisingly, during the summer of 1900. Arthur Henry's granddaughter and biographer, Maggie Walker provides an introduction. To flesh out the real story, this new volume also includes three short non-fiction pieces by Dreiser based on his awkward forays away from the island. A gallery of dozens of period photographs from 1900 Noank enhances a book which transcends local history to become a permanent part of Americana.

Arthur Henry (1867-1934), now a footnote to Dreiser studies, was at the time the better known of the two writers. He was not only Dreiser's frequent companion, but the man whose friendly wager challenged Dreiser to write his break-through novel Sister Carrie. Furthermore, Henry was the man who edited Dreiser's sprawling realism to make it publishable. A journalist, novelist, and playwright, Henry's varied career brought him together with many famous writers and social reformers.

Book Description Flat Hammock Press, 2010. Condition: Good. A+ Customer service! Satisfaction Guaranteed! Book is in Used-Good condition. Pages and cover are clean and intact. Used items may not include supplementary materials such as CDs or access codes. May show signs of minor shelf wear and contain limited notes and highlighting. Seller Inventory # 0981896014-2-4

Book Description Flat Hammock Press, 2010. Condition: Good. Shows some signs of wear, and may have some markings on the inside. Seller Inventory # GRP77614480

Book Description Flat Hammock Press 2009-01-15, 2009. Perfect Paperback. Condition: Good. Item is in good condition. Some moderate creases and wear. This item may not come with CDs or additional parts including access codes for textbooks. Might be an ex-library copy and contain writing/highlighting. Seller Inventory # DS-0981896014-3

Book Description Flat Hammock Press, Mystic CT, 2010. Paperback. Condition: Very Good-. First Edition Thus. 9780981896014; Paper Covers. Previous owner's name on front cover's upper fore corner, else binding is almost as new. Name on title page. Contents are almost as new. ; First Printing of the FIRST EDITION of this book combining the writings of Arthur Henry and Theodore Dreiser, 2010. 8-7/8" Tall, XII + 354pp. Color photo illustrated PAPER COVERS. Cover is a little lighter than posterboard. AN ISLAND CABIN was first published in 1902, a delightful yarn full of good salt air, sun - and wind-burnished characters, and nature's whimsical storms and calms. It has a suspenseful plot in which five disparate friends from the Big City occupy a simple summer cabin - but they do not all revel in nature's embrace. Included in this edition, for the first time, are three short stories by Theodore Dreiser, one of the five friends: A DOER OF THE WORD . THE VILLAGE FEUDISTS. A CRIPPLE WHOSE ENERGY GIVES INSPIATION (THE NOANK BOY) . 23-page illustratio n section, mostly b/w photos, with a map and a couple of reproductions of old advertisements. Three additional b/w photos in text. Seller Inventory # 43269