Items related to How this Happened

Tessema, Dereje Befekadu How this Happened 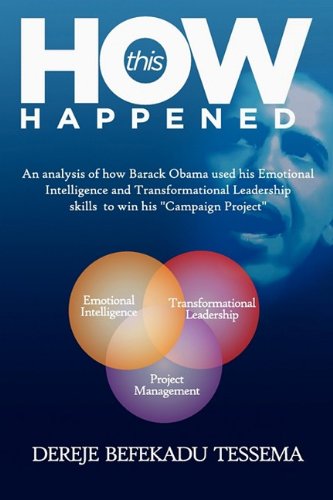 "How this Happened" is a "creative non-fiction" book written with the intention of making it palatable to a wide audience including the many millions who avidly followed the 2008 US presidential election as well as professionals, and scholars who may be interested in looking at how Barack Obama run a successful campaign by looking at it from the perspective of three theoretical frameworks. The author is engaged in the study of the Emotional Intelligence, Transformational Leadership and Project Management frameworks. He has used his research findings together with his personal experience as a first-generation immigrant and his observations while volunteering for the Obama campaign to produce this compelling yet very pleasurable book. Various experts have analyzed Obama's presidential victory, with some attributing it to the economic meltdown or a reverse Bradley effect, while others have lauded Obama for running the campaign like a business entity. Any or all of these rationales may be correct, but the author would argue that the campaign was a success primarily because it was approached as a project. This book presents the author's analysis and describes how Obama and his campaign managers carried out this project. The author's hope is that the discussion will be interesting enough to create an awareness of the role emotional intelligence and transformational leadership play in successfully completing a project and to engage all those who actively followed the campaign in reviewing their experience from a different perspective and recount how such a huge project was run successfully.

Book Description Gashe Publishing. Paperback. Condition: Good. A copy that has been read, but remains in clean condition. All pages are intact, and the cover is intact. The spine may show signs of wear. Pages can include limited notes and highlighting, and the copy can include previous owner inscriptions. At ThriftBooks, our motto is: Read More, Spend Less. Seller Inventory # G0981951805I3N00