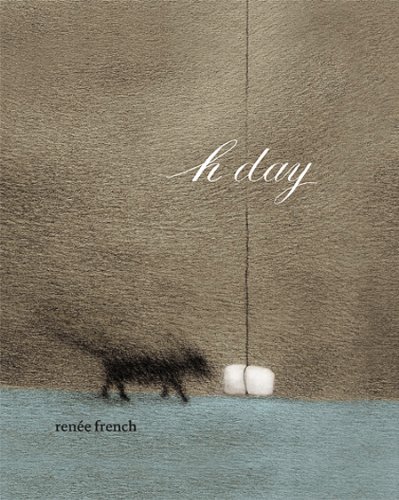 Renée French, an acclaimed graphic novelist and Inkpot Award winner at San Diego's Comic-Con International, has entranced legions of fans with her twisted, highly inventive pencil drawings, whose agile lines and delicate shading open up strange imaginary vistas. She's been called an inimitable and masterful stylist, a kind of Edward Gorey who draws out the whimsical side of body-horror, and indeed, the spirit of Gorey's grotesques breathes through French's creations. In H Day, her first graphic novel in four years, French explores, through metaphor and in pictures, her struggles with migraine headaches, marshaling troops of insects, beasts and humanoids to envision the processes that result in such hideous sensations. A sweeping, often tense narrative of invasion, repulsion and liberation, H Day can be read both as an oblique autobiography and as a suspenseful fantasy story. This volume makes clear the qualities that led Myla Goldberg, author of Bee Season, to call Renée French "that rare gift among artists--one whose work finds its way into the most guarded corners of our psyches and allows us to revel in all that is awkward, embarrassing or sticky about being alive."

"Renée French's graphic novels, including "The Ticking" and "The Soap Lady," tend to split the difference between adorable and horrifically gross. The wordless H DAY (PictureBox, $30), its cover informs us, addresses "her struggles with migraine headaches and Argentine ant infestation." The migraine part is fairly straightforward: the book's left-hand pages are a stripped-down, flipbook-style animation of a body with a ganglionic mass inside its head that crawls out, envelops the head and lashes it to a bed. The right-hand pages, though, are where French gets to show off her command of pillowy pencil textures and viscerally alarming imagery. The book's early sequences are built around lush drawings of blocky, right-angled urban megaliths and their interstices, populated by tiny dark forms (antlike people and dogs), and swirling gusts of black wind that become swarms and streams of dots. Then the plot gets more opaque: there are wrapped and mummified creatures, a hooded figure deploying a white bundle, wicker cages that turn in on themselves. You can skim through the whole thing in about four minutes or spend hours puzzling over how it all fits together. There's only one image on each page, surrounded by clean white space, but it often seems as if teensy crawling beasties are about to emerge and skitter across the whiteness, toward your tasty fingers." --Douglas Wolk, New York Times Book Review, October 31, 2010

Starred Review. Without the back cover informing readers they are about to embark on a journey about migraines and Argentinean ants, French's nearly wordless latest graphic novel (after 2006's The Ticking) would be difficult to penetrate. But perhaps that's the point. The two stories run concurrently: on the left, an unpleasant-looking stinger takes up residence in a faceless body, causing the head to growing incrementally larger, while on the right, a fog-shrouded city is slowly overtaken by a swarm of tiny black ants, the only surviving witness being a small black dog. Both stories are rendered in French's haunting, unique pencil drawings but are distinct from one another, with the migraine pages remaining primarily white with line drawings and little shading, and the ant infestation saga relying heavily on shading and myriad tones of grays. Those afflicted with migraines will recognize a fellow sufferer as French depicts the intense cranial pressure and the feeling that something is clawing around inside one's skull trying to escape (which, in French's world, it does). But despite the intriguingly postapocalyptic feel of the ant invasion, the link to the plight of the migraine sufferer remains elusive. (Nov.)
(c) Copyright PWxyz, LLC. All rights reserved.