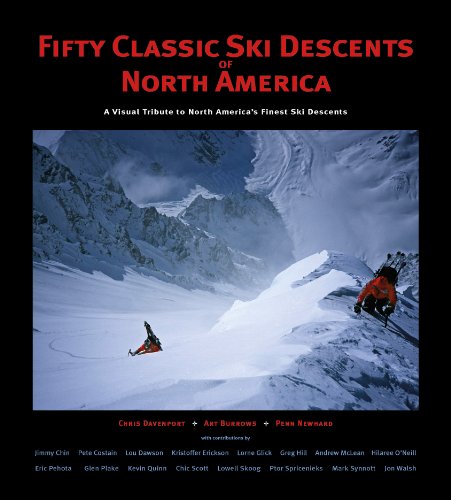 Fifty Classic Ski Descents of North America is a large-format compilation of iconic and aesthetic ski descents from Alaska to Mount Washington. Created by ski mountaineers Chris Davenport, Art Burrows and Penn Newhard, Fifty Classic Ski Descents taps into the local knowledge of contributors such as Andrew McLean, Glen Plake, Lowell Skoog, Chic Scott and Ptor Spricenieks with first person descriptions of their favorite ski descents and insightful perspectives on ski mountaineering past, present and future. The book features 208 pages of gorgeous action and mountain images from many of North America s top photographers. Whether you are planning an expedition to Baffin Island s Polar Star Couloir or heading out for dawn patrol on Mount Superior, Fifty Classic Ski Descents is a visual and inspirational feast of ski mountaineering in North America.

I ll cut right to it. The new book, Fifty Classic Ski Descents of North America, could be to ski alpinists what a relic is to religious fanatics. Get this tome into your presence, and the 12 x 13 inch coffee table compilation of mind blowing photos and well written text will have you rubbing your hands over the cover in homage, and carrying it around cradled in your arms like something a priest tasked you to bring out of an icon repository. Icon on the alter. I found the crampon compatible votive candles at backcountry.com. Seriously, you will find this book to be life changing. At first you might weep with frustration, since few of us will ever do more than a handful of the selected routes. But after your grief subsides, you will bow in respect to what's been done in North America, and find yourself spending hours, perhaps even days, going over the photos and text. You might even quit your job. While I wouldn t use the word worship for my feelings about Fifty Classics, (I reserve that for the big guy upstairs), the concept does apply. Take segid (respect and homage). Once you crack this tome, you have to respect the effort it took authors Burrows, Davenport and Newhard (BDN) to come up with a photography selection that is simply insane (50 photographers, no less!). Yes, the book does cover fifty ski descents and alpine ski traverses as the title implies, but each mountain and route is documented with numerous photos that go beyond anything you ve ever seen in a skiing book. Different angles, different light. Action shots. Landscapes. Aerials. All processed with modern computerized technique by Photoshop master Burrows. Randomly open to any page, and hope Obamacare covers pacemaker surgery as your heart skips. I ll do it. Closing my eyes now. Bam, page 173, South Face of University Peak, Wrangell St. Elias, Alaska. Seven thousand vertical feet of Alaskan fury. Only been skied once. Might be the best line in the world. Or how about sebo (fear and reverence). Closing my eyes again.... aha, page 121, Combatant Couloir on Mount Combatant, British Columbia. Read Mark Synott s account of skiing, including an entrance that he downclimbed first because it was so steep, then climbed back up and glissed after he realized it was possible. Put yourself in his place as he self actualizes and substitutes steel edges for steel ice tools. Sebo. Which brings me to how Fifty Classics is put together. Authors BDN give us introductions to each region, as well as the occasional intro style text for a given route. But they turn the actual blow-by-blow descriptions (for many but not all routes) over to sixteen contributors (and themselves, in the case of Davenport). And well they should, as a number of routes in the book have only had one descent, so the only way to get impressions of a trip down things like the North Face of Mount Robson would be to interview the practitioners, or simply get it written in their own words. With skillful editing and selection of contributors who are mostly published writers, doing so truly turned out fantastic. Sixteen excellent stories will keep the readers among us entertained that is if you can quit staring at the photos. It s sort of like reading Playboy magazine. Yeah, right. But you might get to the articles eventually. That s not saying every one of the fifty routes has an I-was-there story. But you ll find enough of that to grace many evenings of armchair skiing. One of the best stories in Fifty Classics is Pete Costain s tale of his first descent of Mount Stimson (Glacier National Park.) This is wilderness adventure skiing at its best, far different than most of what folks do in central Europe, and indeed a big part of what makes North American ski alpinism such a frontier and what makes our brand of skiing have an ethos all its own. --WildSnow.com