Items related to Heart of the Matter: Letters to My Children

Brad Harrub; Ph.D. Heart of the Matter: Letters to My Children

Heart of the Matter: Letters to My Children 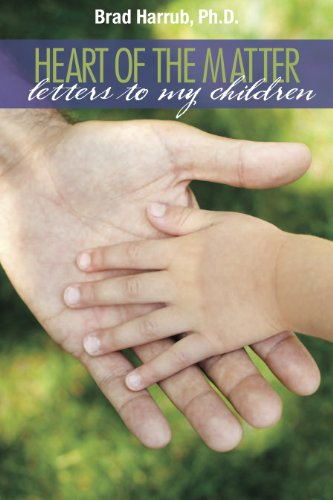 In these touching letters Dr. Brad Harrub consistently points his children back to the Truths found in God's Word. This is the parenting book for which many have been waiting. It tackles topics surrounding Christian life, personal life, the home, and the church! "I have looked into the tearful eyes of many parents as they shared the details of their children abandoning Christianity. While I have learned a great deal about why young people leave, one nugget has stood out from such conversations: there are millions of miles between our children "going through the motions" in reference to their spiritual life versus our children possessing hearts that dictate their actions. Thus, I think it is vitally important for parents, teachers, preachers, and elders to get to the heart of the matter. In this book I hope to share with you what I want to instill in the hearts of my own children and those whom I love"--Brad Harrub

Brad Harrub holds an earned B.S. degree in biology from Kentucky Wesleyan College, and an earned doctorate degree in anatomy and neurobiology from the College of Medicine at the University of Tennessee in Memphis. He was listed in Who s Who Among Scientists and Researchers. He is the author of Convicted: A Scientist Examines the Evidence for Christianity and the coauthor of the books, The Truth About Human Origins, Dissecting the Truth, Investigating Christian Evidences, Matters of Life and Death, Diamonds in the Rough: Nuggets of Truth from God s Word and has written many tracts and articles for brotherhood journals. He is a popular speaker on Christian evidences at lectureships, youth rallies, etc in over 47 states and five different continents. He conducts over 40 Truth About Origins weekend seminars each year. In addition, he was an invited speaker to the International conference on Creationism, and he has appeared on the television show Origins. Dr. Harrub has authored or co-authored numerous scientific publications in science journals and has done mission work in Russia, Ukraine, New Zealand, Ireland, Jamaica, and Nicaragua. Currently, Dr. Harrub serves as the Director and cofounder of Focus Press and as co-editor of Think magazine, a monthly magazine on Christian evidences. He and his wife Melinda have four children.

1. Heart of the Matter : Letters to My Children

Book Description Focus Press, Incorporated. Paperback. Condition: Good. A copy that has been read, but remains in clean condition. All pages are intact, and the cover is intact. The spine may show signs of wear. Pages can include limited notes and highlighting, and the copy can include previous owner inscriptions. At ThriftBooks, our motto is: Read More, Spend Less. Seller Inventory # G0982959532I3N00

2. Heart of the Matter: Letters to My Children

Book Description Focus Press, Inc., 2011. Condition: Good. A+ Customer service! Satisfaction Guaranteed! Book is in Used-Good condition. Pages and cover are clean and intact. Used items may not include supplementary materials such as CDs or access codes. May show signs of minor shelf wear and contain limited notes and highlighting. Seller Inventory # 0982959532-2-4

3. Heart of the Matter: Letters to My Children

4. Heart of the Matter: Letters to My Children

5. Heart of the Matter: Letters to My Children