Items related to Globalization and the Demolition of Society

Loo, Dennis Globalization and the Demolition of Society

Globalization and the Demolition of Society 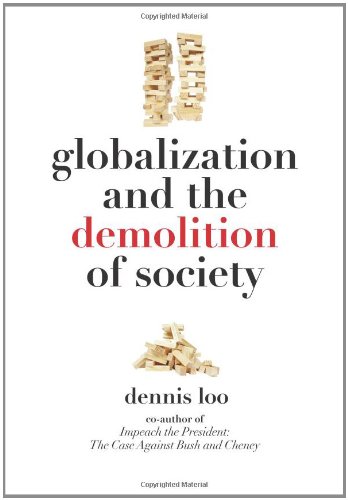 Since the 1980s, advocates of "free market" forces and unrestrained individualism have succeeded in making their views dominant worldwide. In this timely, startlingly honest, wide-ranging, and profound book, Dennis Loo shows that free market fundamentalism - also known as neoliberalism - makes us not more secure or prosperous: it tears the social fabric and undermines security, leading inevitably to disasters on the individual, regional, and global levels. Neoliberalism is based on the mantra that market forces should run everything. It aims to eliminate job and income security, the social safety net (including welfare and other social guarantees), unions, pensions, public services, and the governmental regulation of corporations. It consequently undermines the basis for people to voluntarily cooperate with authority as almost everyone is increasingly left by themselves to face gargantuan private interests, with governmental and corporate authority ever more indifferent to the public's welfare. Loo points out that given this trend, the government must rely on ever increasing secrecy, deception, surveillance, fear and force in order to keep people in line, no matter which political party is in power. This is the underlying reason why the Democratic and Republican Parties are less and less distinguishable from each other, and why both parties have been moving politically to the Right. Loo tells this story of two worlds in contention - those who uphold private interest vs. those who defend the public interest - by drawing from everyday life to illustrate and bring alive what might otherwise seem to be disconnected and disparate disturbing developments. He conveys complex topics and questions with remarkable clarity, subtlety, and sophistication. Even after reading only one chapter, you will come away from Globalization and the Demolition of Society looking at the world differently. This book calls for the kind of grassroots mass movements that Arab Spring and its inspired domestic equivalent, the Occupy Movement, exemplify. Loo skillfully weaves together multiple disciplines (sociology, history, political science, criminology, law, economics, and philosophy) and illustrates them with examples from everyday life. He paints a vivid picture of the perils and possibilities that humanity confronts at this juncture of history.

A clear understanding of what we face as a society needs to inform our decision-making processes on the societal level and on the individual level, now more than ever. Yet it is more difficult than ever to get an accurate picture, let alone a good analysis, of what's afoot from normally relied upon sources such as mainstream media and public officials. In this book I do something that most people don't try to do: convey in the most rigorous and sophisticated way possible what's going on, so that the issues and their complexities aren't oversimplified, but I illustrate these points with examples drawn from everyday life. That way what might appear disturbing, threatening, confusing, and/or frustrating can be made clear and people, no matter what their background, can relate to and act effectively upon what they now understand more deeply. As I state in the Introduction, when "it comes to society, deciphering what is going on and determining what to do about it are more difficult than simply saying: 'Here's what is happening and here's what we can do about it.' Barriers get in the way of both correctly understanding what is going on and taking action that will accomplish what you seek." That is why this book covers a lot of ground, including history and theory, because learning the lessons of history and being conscious about the particular theoretical lens we are employing is indispensable to the people actually governing ourselves. The stakes are exceedingly high and the time is short, but an opening is now apparent that appeared after I finished the book: Arab Spring and the grassroots popular eruptions worldwide that are known in the U.S. as the Occupy movement. These developments are enormously encouraging and are the kind of mass popular action that I point to in my book as the way forward.

"Does the advice we get on health care over the mainstream media give us enough scope, depth and detail to allow us to treat ourselves and be our own physicians? Certainly not. Why would political advice dispensed via mainstream media and existing governmental institutions be any better? Is it reasonable to expect that reliance upon the major parties' campaign pitches and the injunction 'just vote' could possibly be all you need to know to change society? The richest 497 individuals in the world have more wealth than the bottom fifty percent of the world's population. If you had such extreme wealth and power and enjoyed your luxuries more than justice, would you let your possessions be subject to the whims of the principle of 'one person, one vote?' Would you let your extraordinary wealth be outvoted? You would be crazy to do so."

1. Globalization and the Demolition of Society

2. Globalization and the Demolition of Society

3. Globalization and the Demolition of Society [Hardcover] Loo, Dennis

4. Globalization and the Demolition of Society

5. Globalization and the Demolition of Society