Items related to Saddle Up, Charlie: Charlie Wysocki's Journey From... 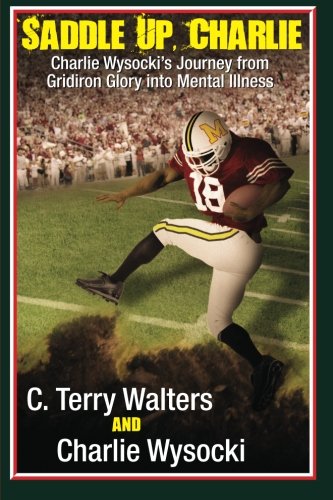 “Saddle-up, Charlie.” With those words University of Maryland football coach Jerry Claiborne nudged Charlie Wysocki toward the playing field as the punt return unit headed toward the sideline. Charlie knew what was expected. He would take the hand-off from quarterback Boomer Esiason and rush toward the slice of daylight created by his offensive line, over and over again until he reached the end zone. With each punishing foray into enemy territory, Charlie put a greater distance between himself and the lost boy named Charlie DeGraffenreid. Every big gain or touchdown moved him closer to his dream of playing in the NFL Now Charlie Wysocki finally gets to tell his story. From Pennsylvania high school wrestling champion and college All-ACC football player, his life spiraled down to a depth from which few have ever returned. Charlie still fights today for redemption and a shot at the happiness that mental illness has denied him. The Wysocki odyssey is an uneasy voyage, but one that will prove too compelling to miss.

C. Terry Walters, author of "Diamond Redemptions-Baseball the Way It Should Have Been", lives in Pennsylvania and is finishing his third non-fiction project entitled "The Low Self-Esteem Club: The Stories Behind Baseball's Most Unflattering Nicknames". Terry, an unabashed baseball nut, serves as Official Scorer for the Eastern Baseball League Harrisburg Senators, the Double-A minor league affiliate of the Washington Nationals.