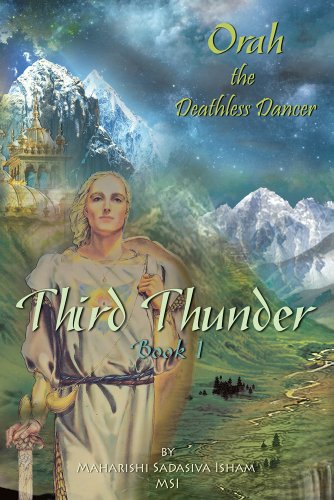 The third book in the Thunder series continues the visionary themes introduced in Second Thunder. Personifying our human experience, Orah, a Lord of Etan, comes to realize in his undertaking to save his planet, that fear, loss, suffering, and death are only illusions; that the Truth of the omnipotent well of love and strength within our own hearts is the ultimate Reality and the key to human evolution. The story is riveting, filled with the intense conflicts of the ongoing battle between the light of Pure Consciousness and the darkness of ignorance. Valin, the Asur emperor, and his armies represent the ego, which opposes the upward movement of creation.

Maharishi Sadasiva Isham, or “MSI,” was born April 13, 1949 in Seattle, Washington. After setting out in search of Truth, it was in the Himalayas that he found the ancient order of monks known as the Ishayas. From them he learned the techniques collectively known as the Art of Ascension as taught by the Ishayas. MSI eloquently writes about the science, the practice, and the teaching of Ascension. His collections of books are a beautiful description of what anyone can accomplish when willing to make the commitment to realizing the Truth. He desired that no attention be placed on the author, but rather the focus be on the teaching. All True teachings ultimately point back at your own heart, to you, the reader and seeker of Truth. MSI ascended the physical world on August 12, 1997.