Items related to Shadow of the Sun

Shadow of the Sun 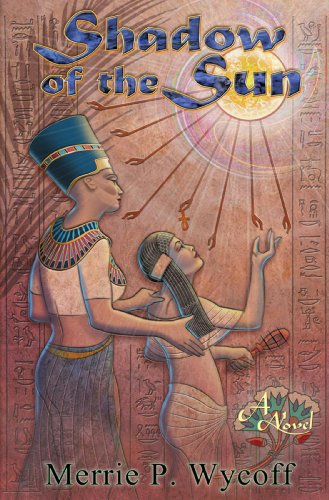 A reign of terror has kept Egypt in shadow, even at the apex of her power and glory.  The greedy and corrupt priests of the dark god Amun maintain a tight grip on the people through the use of fear, superstition, brutality, and, when necessary, diabolical sorcery.

Now, there is the promise of a new hope, a new light, but that promise is not welcomed by all. When the ambitious Queen Nefertiti and her consort, the gentle King Akhenaten, introduce a peaceful--and revolutionary--form of Sun worship in the hope of bringing about harmony and unification, Egypt is instead torn into warring factions on all levels of society.

Into this deadly conflict is born the first Royal Daughter, Merit-Aten, whose ability to see vivid auras and converse with animals comes with a price. Before her birth, she entered into a sacred contract to save her family and restore peace to her country. But, with danger threatening from every side--even from within her own family--will she be able to honor her contract without destroying everyone she loves?

At the age of ten, while on a school field trip to a local museum, Merrie P. Wycoff saw a colossal statue of Pharaoh Akhenaten. She was instantly mesmerized, and so was born her passion for Egypt, its history, and its ancient people.  That passion has stayed with her from her growing-up years through today, fueled by her long-ago vow to write Akhenaten's story.  Now, with the publication of Shadow of the Sun and Stealing the Shadow of Death, she has fulfilled that vow.

In addition to a B.A in Public Relations, an M.A. in Metaphysical Studies, and a Ph.D. in Comparative Religion, Merrie earned her Egyptology Certificate with the University of Manchester in Great Britain. But she feels that perhaps the most important part of her education was her time spent with Abd'El Hakim Awyan, a recognized Elder and Indigenous Egyptian Wisdom Keeper of the Eye Tribe and Keeper of the Keys, whom she met on one of her visits to Egypt.  Her studies with him taught her things that could not be learned from books, invaluable teachings of ritual, magic, and history, all of which she has put to good use in these books, and in her personal life.

Having worked at Entertainment Tonight for six years as a Segment Producer, Merrie then used those skills to create an infomercial company with her husband and launch Zap! The Professional Restorer along with other well-known direct response products.

Merrie resides in Colorado with her family, close to the majesty and the magic of the Rocky Mountains.  There she follows her calling as a vibrational healer and writer. Shadow of the Sun and Stealing the Shadow of Death are the first two novels in the Shadow Saga.

1. Shadow of the Sun

2. Shadow of the Sun

3. Shadow of the Sun