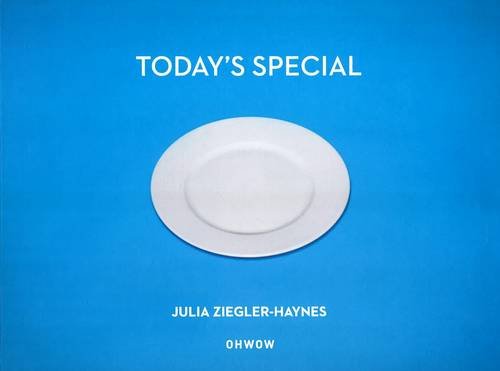 Todayʼs Special by the Brooklyn-based artist and chef Julia Ziegler-Haynes, illustrates the final meals or "special meals," requested by 24 death row inmates on the eve of their execution. Her intention in creating this work is to examine the human condition through the contrast of capital punishment and the forgiving gesture of granting one last request. Fascinated with the subject of the last meal, Ziegler-Haynes undertook extensive and emotionally exhaustive research through the public records of death row inmates. She then selected meals and painstakingly recreated them, arranging or cooking items exactly to the recorded likings and specifications of each prisoner. A brief detailing of the inmateʼs crime and penalty appears toward the end of the book, beside a thumbnail of its corresponding image. Her visual aesthetic is inspired by Christian Boltanskiʼs Compositions décoratives (1976), and significantly influenced by the food styling from that era with its faded backdrops and unappetizing simplicity - likened to food images from the windows of cheap restaurants. Envisioning how each meal would appear served in the prisons, Ziegler-Haynes (enlisting photographer Ashley Macknica) then juxtaposed her versions against vibrant backgrounds to liven what she assumed to be the opposite of their actual presentation. "I imagine, for instance, they serve frozen hamburger patties on commercially made buns," she states. The resulting images are quasi-portraits of each individual. By purposefully capturing the meals from the vantage point of the diner, the viewer is then prompted to consider the solitude of this poignant moment. For Ziegler-Haynes, the experience of playing the dual roles of historian and chef-sifting through traumatic pasts and forcibly taking on the responsibility of an accommodating hostess-became a greater part of the piece than the actual photographs.

Book Description OHWOW, 2012. Condition: Good. A+ Customer service! Satisfaction Guaranteed! Book is in Used-Good condition. Pages and cover are clean and intact. Used items may not include supplementary materials such as CDs or access codes. May show signs of minor shelf wear and contain limited notes and highlighting. Seller Inventory # 098536551X-2-4