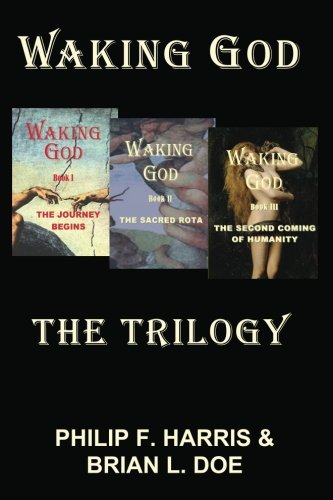 The Waking God Trilogy is not about the doom and gloom that organized religions would have you believe. It is not about an Armageddon style ‘end times’ that pits good against evil in some final battle where religious dogma is triumphant. Yes, there is a final battle of sorts, but as Mantrella says, “It is not about saving humanity, it never has been.” While the Trilogy comes down hard on organized religion and its ‘worn out dogma,’ it is not atheistic. Instead, it totally rejects the idea of some schizophrenic super-being that loves to punish and reward its servants, and recognizes a Universal consciousness of which we are all a part. It acknowledges that within each of us there is a ‘god seed’ that is waiting to experience an awakening brought on, as in any major evolution, by not only environmental, but also social, economic, and political stress that will help to create a spontaneous evolution in humanity. Or, if allowed to remain dormant, this same seed will be our undoing. The prophecies all speak of a choice. Nostradamus, the Hopi, the Mayans, the I Ching, the Riddles of DaVinci, and the Tarot speak to a time of choosing. Hidden codices, books of revelation, and ancient sacred texts also speak of this time of choosing. That time is upon us. The elements are all there. From bursts of energy from the center of our galaxy to the scientific discoveries about the true nature of our reality, the puzzle nears its completion. Andrew, the young comparative religions professor, knows what he needs to do. He needs to give the still sleeping Adam flesh, by mating with a young and mysterious Middle Eastern woman known as Mara. The time is right at last, so what can possibly stop Andrew and Mara from coming together in fulfillment of prophecy? Well, for one thing, there's Michael. And then there are those who follow Michael, the great archangel who's made it his mission to keep humanity in its current ignorant and deluded state. Ranged on the looming battle's other side are Mantrella, Bringer of Light, and those who follow him. Meanwhile, Earth itself convulses as its inhabitants endure the plagues of Revelation. Will those who can stop Michael act in time? And even if they do, will they prevail? Focusing on ‘worn out religious dogma’ as one of the leading causes of human strife, the Trilogy turns the mythical world of good vs. evil on its head. Mantrella, a.k.a. Lucifer, is the champion of humanity, while the Archangel Michael fights to suppress human evolution by preventing the physical birth of the biblical Adam. Human destiny is placed squarely on the shoulders of where it belongs: choice; our thoughts create our reality. The Battle of Armageddon has already begun, but not the one religion portrays as the End Times. Can Michael stop the physical birth of Adam? Do the forces of good and evil battle it out for humanity’s soul? Is Lucifer really the ‘great deceiver’ or is he humanity’s guardian? Who can truly save humanity, if indeed it needs saving? All that is hidden is revealed between the lines and beyond the words. Will the ‘dreamer’ awaken? You must decide! In these times of economic, political, social and religious upheaval, the TRILOGY is required reading, now more than ever! “...make the Da Vinci Code look like a church hymn.... It should make you think. Calling it provocative is an understatement. ...groundbreaking and revolutionary ideas .... Epic in scope ....”

Philip F. Harris was born in Massachusetts and currently resides in Maine. He received his degree in Political Science from The American University in Washington, D.C. and has worked at every level of government. He is currently involved in special education. In addition to the Waking God Trilogy, he is the author of: A MAINE CHRISTMAS CAROL ( Cambridge Books); JESUS TAUGHT IT, TOO: THE EARLY ROOTS OF THE LAW OF ATTRACTION, 2nd edition (All Things That MatterPress); RAPING LOUISIANA: A DIARY OF DECEIT (Cambridge Books); POLARIZING YOUR LIFE TOWARDS PERFECTION (Cambridge Books); and COLLECTED MESSAGES: GUIDES FOR PERSONAL TRANSFORMATION (All Things That Matter Press). Phil is a nationally syndicated and featured writer for The American Chronicle and has a blog called ALL THINGS THAT MATTER. He is spiritual growth expert on SelfGrowth.com. More information on his works can be found at: http://allthingsthatmatterpress.com,http://philipharris.blogspot.com, http://wakinggod1.blogspot.com,http://www.wakinggod.com. A certified Holistic Life Coach, Mr. Harris offers guidance to those seeking to take control of their body, mind and spirit. Brian L. Doe was born in Ogdensburg, New York, and grew up on the shores of the St. Lawrence River. From a young age, he recognized his passion for the written word and committed himself to the pursuit of writing. He received a Bachelor’s Degree in writing from St. Lawrence University, and a Master’s Degree in secondary education from the State University of New York at Potsdam College. His first novel, Barley and Gold, was published in 2001 and again in 2008 along with his second book, The Grace Note. He is also coauthor of the trilogy Waking God with Philip F. Harris. Mr. Doe is an English teacher in Upstate New York where he lives with his wife and children.

Book Description All Things That Matter Press, 2012. PAP. Condition: New. New Book. Delivered from our UK warehouse in 4 to 14 business days. THIS BOOK IS PRINTED ON DEMAND. Established seller since 2000. Seller Inventory # IQ-9780985778996