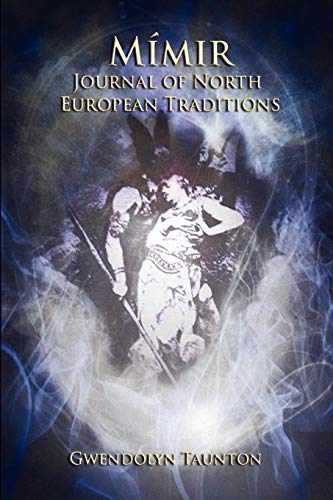 Previously titled Northern Traditions, Mimir - Journal of North European Traditions is the highly anticipated sequel to the first book Northern Traditions. Mimir offers a unique combination of academic research and cultural content. Though the level of research remains high, it is not the goal of Mimir to become a purely scholastic publication - rather our work is directed at the educated practitioners of the North European Traditions. In light of this, Mimir contains new research, translations of texts, original artwork and poetry to ensure it does not become a dry publication destined only for dusty university shelves. Instead, Mimir is designed to help cross the divide between academic research and practical experience in spirituality. Mimir, is first and foremost, a publication designed for those who are themselves believers in the Northern faiths - whether it be Asatru, Teutonic, Celtic, Anglo-Saxon or any other faith which is indigenous to Northern Europe. For this second volume, we have assembled a highly talented team of experts who we hope you will enjoy. Authors include: Gwendolyn Taunton, Matt Hajduk, Eirikr Magnusson, Brett Stevens and Maria Kvilhaug.Content Includes:

Mimir: Journal of Northern Traditions is the second edition of Northern Traditions, rebranded under the new name, and it explores the role of paganism in a capacity where it is likely to become the dominant Tradition of the West, following the 'Death of God'. The world is changing quickly and it is apparent that we now approach an important turning point in history. We are entering a transition period, where one way of life perishes and another is born anew. But will this terminate with an explosion, or a wistful sigh? At the moment the Occident is struggling with mounting bad debt, wastefulness, poor health, corrupt or ineffectual leadership, pollution, social problems and an obsession with the superficial. We, the modern heirs to Europe have committed proverbial suicide though greed - stripping our culture of all that was once high and noble, we have put gold upon a pedestal and worshipped Mammon. What we are left with after the 'Death of God' is a world where we worship the false idols that we have erected on undeserved ivory pedestals. Without the wisdom and guidance of Tradition, we have raised generation upon generation of materialists, and now we must pay the price for our ignorance. As Nietzsche illustrates, humanity is presently not evolved enough to live in a world devoid of spiritual teachings, and we the few who remain must now guide the many, as the full of impact of the death of Europe's spiritual life comes into force. Mimir brings us heathenism in the wake of the post-Nietzsche 'God is Dead' era, and helps bring the past into the contemporary setting.

Every Tradition grows ever more venerable - the moreremote its origin, the more confused that origin is.The reverence due to it increases from generation togeneration. The Tradition finally becomes holy andinspires awe.- Friedrich Nietzsche

Book Description Manticore Press, 2012. Paperback. Condition: Good. Connecting readers with great books since 1972. Used books may not include companion materials, some shelf wear, may contain highlighting/notes, may not include cdrom or access codes. Customer service is our top priority!. Seller Inventory # S_282035814

Book Description Manticore Press, 2012. Condition: Good. A+ Customer service! Satisfaction Guaranteed! Book is in Used-Good condition. Pages and cover are clean and intact. Used items may not include supplementary materials such as CDs or access codes. May show signs of minor shelf wear and contain limited notes and highlighting. Seller Inventory # 0987158147-2-4