Items related to In Harm's Way: Surviving the Zombie Apocalypse... 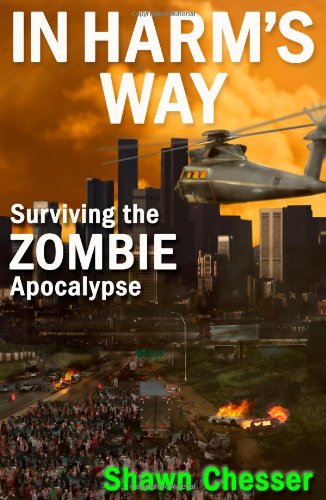 In Harm’s Way, Book 3 in the Surviving the Zombie Apocalypse series, picks up on Day 8 where “Soldier On: Surviving the Zombie Apocalypse” left off. Outbreak - Day1 Like a fragile house of cards in a hurricane, Presidents, Premiers, entire governments and their ruling bodies disappeared instantly. Some had ensconced themselves in deep underground bunkers or remained holed up in fortified strongholds, but history would tell that most had been swallowed up by the dead - never to be heard from again. Infection rates skyrocketed in the United States’ largest cities the first days of the outbreak, as the rapacious dead delivered the Omega virus with emotionless efficiency. During the ensuing days, the rest of the country and the world shared the same fate as Omega spread exponentially from within the mega population centers, pulsing into the countryside, a rotten, shambling diaspora. It had taken 3.7 billion years for man to evolve from a universal common ancestor – to stop dragging his collective knuckles - finally to emerge the dominant species, complete with shiny new iPads, Smartphones, worldwide non-stop air travel, and all manner of high tech war machines. Yet it had taken one microscopic manmade virus only three days to deliver mankind, on its collective knees, to the doorstep of extinction. Outbreak – Day 8 After running and gunning across much of the western U.S., Cade Grayson, former Delta Force operator, is finally reunited with his wife Brook and daughter Raven. Hours after arriving at the relative safety of Schriever Air Force Base in Colorado Springs, the new Capital of the United States, Cade is approached by the new President, Valerie Clay. Her request is simple: she appeals to the patriot in him to rejoin the Unit that he left for civilian life fifteen months prior and once more go into harm’s way, taking the fight to the enemy. Meanwhile, Duncan Winters, Vietnam-era aviator, finds himself stranded in Springs along with BLM firefighter Daymon Bush. Both men arrived with Cade and were promised transport back to Eden, Utah. Duncan longs to be reunited in Eden with his brother Logan, a survivalist/ Doomsday prepper. Daymon, with no surviving family, knows only one thing for certain: he doesn’t want to remain trapped behind the wire inside of a huge government-run military base. Mere days after Washington D.C. is overrun and the sitting President goes missing, Robert Christian, billionaire kingmaker who has been waiting in the wings for a world-changing event such as this, marshals his group of mercenaries led by ex-SEAL Ian Bishop. Their mission: to control what remains of the United States by any means necessary and ultimately reshape the country to fit their warped vision for a new world order. Will Cade accept President Clay’s overture and embark on a new high priority mission alongside his friend and mentor, Delta Commander General Mike Desantos? Will Brook Grayson continue to hone her newly found survival skills and successfully train her eleven-year-old daughter Raven to defend herself against the undead threat? Will Captain Ronnie Gaines and his SF soldiers from Fort Kit Carson succeed in clearing downtown Springs of the zombie menace? Will Duncan and Daymon survive their flight from Schriever Air Force Base and find the survivalist group in Eden? Can the human race survive what appears to be its final extinction level event?

Shawn Chesser, a practicing father, has been a zombie fanatic for decades. He likes his creatures shambling, trudging, and moaning. As for fast, agile, screaming specimens...not so much. He lives in Portland, Oregon, with his wife, two kids and three fish.

Book Description Morbid Press, 2012. Condition: Good. A+ Customer service! Satisfaction Guaranteed! Book is in Used-Good condition. Pages and cover are clean and intact. Used items may not include supplementary materials such as CDs or access codes. May show signs of minor shelf wear and contain limited notes and highlighting. Seller Inventory # 0988257629-2-4

Book Description Paperback. Condition: Good. The book has been read but remains in clean condition. All pages are intact and the cover is intact. Some minor wear to the spine. Seller Inventory # GOR009517595

Book Description Paperback. Condition: Very Good. The book has been read, but is in excellent condition. Pages are intact and not marred by notes or highlighting. The spine remains undamaged. Seller Inventory # GOR006157708