Items related to The MacKinnon's Bride (The Highland Brides) (Volume... 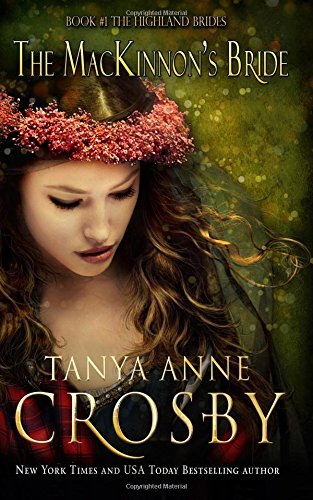 Descended of the legendary sons of MacAlpin, Iain MacKinnon refuses to bow to the English. When his young son is captured by a minion of the English king, the fierce Scottish chieftain vows to stop at nothing to secure the lad's return. Retaliating in kind, he captures the daughter of his enemy, planning to bargain with the devil.
FitzSimon's daughter has lived her entire life in the shadow of the man she called father--yet never would she have imagined he would forsake his only daughter. Even as Page blames her captor for welching on a contract with her father, she suspects the truth. But the shadows hold secrets ... now only the love of her reluctant champion can save the MacKinnon's Bride.

This book begins The Highland Brides series.
Other books in this series:Lyon's GiftOn Bended KneeLion Heart

New York Times bestselling author Tanya Anne Crosby is a five-time nominee for a Romantic Times Career Achievement Award. She is best known for stories charged with emotion and humor and filled with flawed characters. Tanya has written for Kensington Publishing, Harlequin, and Avon Books/Harper Collins, where her fifth book Once Upon a Kiss launched the Avon Romantic Treasures line. She lives with her husband, two very spoiled labs and two ex-stray cats in northern Michigan and grew up in Charleston, South Carolina. Her favorite color is green. She once tried to change her name to Anne (in the third grade) and has a dual citizenship (U.S. and Spain), which she fully intends to put to good use now that the kids are grown and have their own cars.

Book Description Paperback. Condition: Very Good. The book has been read, but is in excellent condition. Pages are intact and not marred by notes or highlighting. The spine remains undamaged. Seller Inventory # GOR008689936

Book Description Oliver-Heber Books, 2013. Paperback. Condition: Good. Connecting readers with great books since 1972. Used books may not include companion materials, some shelf wear, may contain highlighting/notes, may not include cdrom or access codes. Customer service is our top priority!. Seller Inventory # S_274202829

Book Description Oliver-Heber Books, 2013. Condition: Good. A+ Customer service! Satisfaction Guaranteed! Book is in Used-Good condition. Pages and cover are clean and intact. Used items may not include supplementary materials such as CDs or access codes. May show signs of minor shelf wear and contain limited notes and highlighting. Seller Inventory # 0988497484-2-4