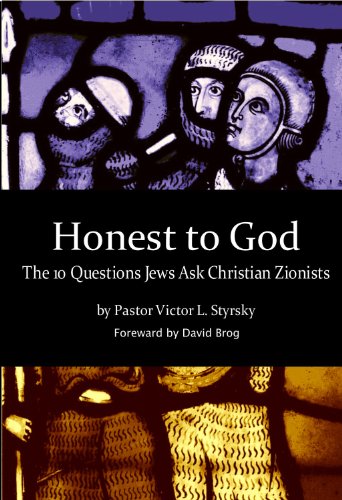 By David Brog, Author, Standing With Israel. After writing my book, I was intellectually convinced that evangelical Christians are real and sincere friends without ulterior motive. But, I must confess, my heart had not kept up with my head. After having grown up with so much suspicion, I did not quickly let my guard down. It was with tense shoulders and crossed arms that I spoke to actual Christian Zionists. Then I met Pastor Victor Styrsky. We appeared together on a panel at a pro-Israel conference. Here, in front of me, was a flesh-and-blood example of the latter-day righteous gentile I had written about in my book. Here was a man who was visibly pained by the history of Christian anti-Semitism that he knew so well. Here was a man who wanted not only to mourn the tragedies of the past, but to change the future. Here was a man who felt a dedication to the Jewish people and Israel every bit as emotional, deep and real as my own. It did not take long until we had recruited Victor into the leadership of Christians United for Israel. But even more importantly, it did not take long until Victor had become one of my dearest friends and closest brothers. It is hard to maintain psychological distance when someone shares your heart. Victor was one of my first personal connections in the Christian world, and through Victor I have come to make so many more. I therefore am thrilled that Victor has finally put pen to paper and shared his warm and oversized heart with a broader audience. It is one thing for me, a Jew, to describe what motivates Christian support for Israel. It is quite another thing for a Christian supporter of Israel to share his beliefs and thoughts directly. This book is a valuable contribution to what is still a far too limited literature. I strongly encourage my fellow Jews to take the time to read this book. Throughout all of the lonely centuries, we have prayed for more understanding, appreciation and love from our gentile neighbors. Today, in America, this prayer has been answered in so many ways, including the rise of millions of pro-Israel Christians. Before we dismiss this outpouring of support on the basis of myths and misinformation, we must at least give our friends a hearing, and make an effort to understand them. Victor Styrsky has saved you the trouble of trying to piece together the thinking of Christian Zionists it is all in his book. Start reading; you might just like what you see. This book is also a valuable resource for Christians. Supporting Israel, and working with the Jewish community, is a most challenging enterprise. Religion, politics, and a troubled history will place many stumbling blocks in your path. Victor s experience from twenty-five years of pro-Israel work will help clear the way for you. It is a most effective primer. I must warn you. Victor is harder on his fellow Christians than I would ever be. I have argued that pro-Israel Christians in America today have nothing whatsoever to do with the Christians who persecuted Jews years ago in distant lands. Victor strongly, and consistently, disagrees with me and assumes responsibility for anti-Semitic acts done in the name of his Savior. I understand that Christians are unfamiliar with Jews and our sensitivities and that it will take time before we have bridged these gaps. Victor is often impatient when Christians unwittingly insult Jewish sensibilities. Yet while I may disagree with Victor s position, I am by no means surprised by it. It is just like Victor to demand more of himself, and of his fellow Christians, than others would.

Victor Styrsky has been a pastor, music director, and pro-Israel activist for more than thirty years and is the Christians United for Israel, (CUFI) Eastern Regional Coordinator. Pastor Styrsky is a frequent speaker at AIPAC, churches, synagogues, college campuses, conferences and pro-Israel events across the nation. He was also invited by the Conference of Presidents of Major Jewish Organizations to address the 25,000-person rally outside the United Nations in protest of Mahmoud Ahmadinejad s visit to Washington, D.C. Victor and his wife Marita have lived in the midst of Northern California s largest Sunni Muslim community in Sacramento for over fifteen years and are proud parents and grandparents.

What can I say? I have to hold back tears to read your words. I have never heard nor read anything like it in my life. It is difficult to describe what it means to me as a Jewess. I'm sure you have heard it from others. I feel overwhelmed by the deepest emotions, as though it is not just me receiving your numinous gifts; there is a welling up of something that is more than just me, in my blood my ancestors singing in relief, gratitude and joy. --C. Stang, Sydney, Australia --Author