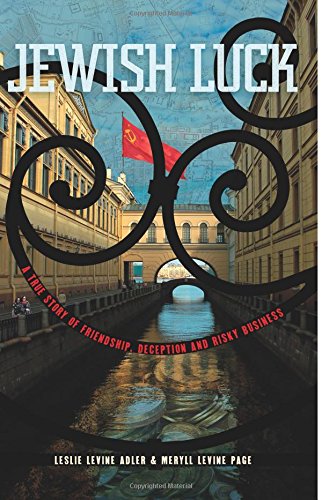 Jewish Luck recounts the intertwined stories of two women who—in their struggles against the anti-Semitism and patriarchy of the Soviet regime and the rebranded “New” Russia—succeed by creating their own luck.

Their sisterhood is kindled when Vera and Alisa grudgingly line up to register for classes at the Institute that produced experts in Marxist-Leninist economics, a field on its way to extinction. For the next three decades, Vera and Alisa fight for their dreams of self-expression and status. To do so they must deprogram their minds of Soviet theory and learn the new language of a free market economy.

After Vera dares to approach author Leslie Adler on a Leningrad corner in 1976, a forbidden friendship is formed. Leslie becomes Vera’s confidante and link to the West. With help from her Minneapolis connections, Vera builds a successful business in Russia despite her disdain for her country and the disruption of Russian mafia attacks. In contrast, Alisa secretly escapes the Soviet Union and constructs a life in Sweden from scratch.

Jewish Luck invites readers to inhabit the lives of two extraordinary and headstrong women as they fight to establish themselves in a time and place where women, Jews, and capitalism were disparaged.

Leslie Levine Adler, PhD visited Russia in the summer of 1976 as part of her undergraduate Russian Studies program. She returned in 1977 to pursue her friendships from the previous summer. After teaching ESL at university, she became a psychologist. Meryll Levine Page is a retired high school history teacher with a special interest in women’s history. She taught extensively about the Soviet Union and its break-up. Currently she co-facilitates a Jewish Artists’ Lab. Both sisters live in the Minneapolis area. For a book club discussion guide and more information, visit our website: www.morejewishluck.com