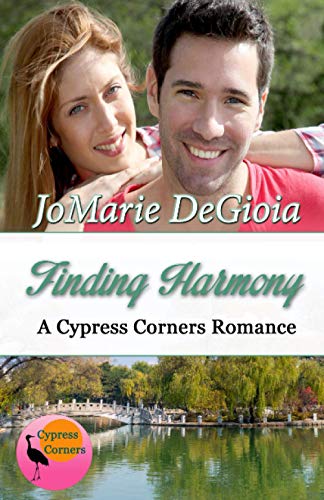 A country girl committed to nature.
A city guy with his eye on the bottom line. A battle of wills...a battle for balance And a love that can tip the scales Rick Chapman is climbing to the top rung of his father's corporate ladder. Fulfilling Chapman Financial's contract at Cypress Corners, Florida will finally prove his value to the company. And to his father. But one endangered weed, and the pretty plant girl trying to save it, could really screw up his plans. Harmony Brooks loves her job as a plant conservationist at Cypress Corners, and the money she earns allows her to make up for a former boyfriend's betrayal. He not only stole her parents' money, he stole her heart. And that's something she won't ever risk again. But opposites attract, not that she or Rick ever expected to fall in love. Can Harmony prove to Rick that he's worth so much more than his father's approval? Or is Rick so blind he can't see that loving Harmony is worth losing what he's wanted for so long?

JoMarie DeGioia has been making up stories for as long as she can remember and has spent years giving voice to the characters in her head. She’s known Mickey Mouse from the “inside,” has been a copyeditor for her town’s newspaper, and a bookseller. She writes Historical and Contemporary Romances, along with Young and New Adult Fantasy stories. She divides her time between Central Florida and New England, and you may contact her at JoMarie@JoMarieDeGioia.com