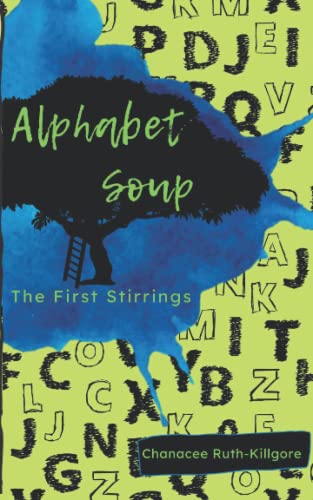 When Allison and her brother, Ryan, find themselves stuck with their crazy Aunt Penelope for the night, they are determined to sulk and be bored. Aunt Penelope’s plans, however, involve a little more imagination - namely, Alphabet Soup. The two are sucked through a portal created by the soup and lost in an unknown land. There they stumble upon the tree house that Ryan has longed for as well as the dog he has always wanted. To Ryan things are perfect; but when Allison sees in the distance the castle of her dreams, the real adventure begins. Book 1 in the Alphabet Soup series.

A timeless lesson offered by Chanacee Ruth-Killgore in Alphabet Soup and an adventure from the moment you begin reading it... you'll find yourself picking it up more than once! I look forward to personally sharing this adventure with my daughter one day by her bedside as she drifts into a dream world with the Queen of the Peiridae watching after her. Alphabet Soup must be shared with everyone who believes in good conquering evil.
- Michael Campo, Writer/Producer - Grassroots Films, The Human Experience

Chanacee Ruth-Killgore deftly sets the stage for any parent who aspires to help their children to do good in the face of evil. Alphabet Soup stirs the mind, captivates the heart and offers timely wisdom in the battle to do the right thing. A perfect tool of moral clarity in an unclear world that all children will benefit from.
- Marlon De La Torre, MA, MEd.
Director of Catechist Formation and Children's Catechesis Catholic Diocese of Fort Worth; Author of Screwtape Teaches the Faith

Book Description Peiridae Press. Paperback. Condition: Good. A copy that has been read, but remains in clean condition. All pages are intact, and the cover is intact. The spine may show signs of wear. Pages can include limited notes and highlighting, and the copy can include previous owner inscriptions. At ThriftBooks, our motto is: Read More, Spend Less. Seller Inventory # G0991010213I3N00

Book Description Chanacee Ruth Killgore, 2013. Condition: Good. A+ Customer service! Satisfaction Guaranteed! Book is in Used-Good condition. Pages and cover are clean and intact. Used items may not include supplementary materials such as CDs or access codes. May show signs of minor shelf wear and contain limited notes and highlighting. Seller Inventory # 0991010213-2-4