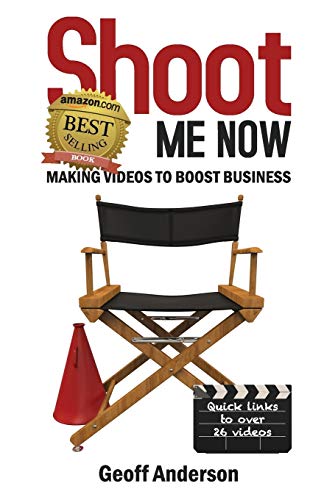 Shoot Me Now - Making Videos to Boost Business, outlines what's happening in the online world of video and how to make videos that engage your audience. The easy to read structure of this book allows you to jump to the section most relevant for you. In 2012, video accounted for 34% of internet traffic. In 2014 it will be 90%. This book outlines how to make videos that stand out from the noise and what types of productions are most suited to you and your business. Online video is here to stay and if you are serious about being in business you need to be watched and be watchable. With online video you only have a few seconds to grab the attention of your audience. And once you have their attention how do you maintain it and convert that interest into business for you? Shoot Me Now covers how to prepare and plan your video, how to efficiently produce it, the traps to avoid, what types of videos are best suited for your needs, how to distribute your video and how to look like a million dollars without spending it.

With over 20 years experience of making corporate videos, I wanted to share some of the knowledge I have. More and more businesses are using video to promote their products and services. While some are doing it well many are making fundamental mistakes that can easily be avoided. Just because anyone with a smartphone can shoot a video, it doesn't mean it will enhance your brand or bring in sales. More often than not it can actually turn customers away. The tips and tricks in this book can save you thousands of dollars in avoidable mistakes. There are also plenty of suggestions of different ways to use video to promote your business.Video is no longer a nice to have, it's a must have for any serious or up and coming business.

Geoff Anderson loves helping his clients tell their stories through video. Since 1993 he has owned and operated Sonic Sight, a video production facility in Sydney Australia.

He has worked for clients on productions throughout Australia, New Zealand, Singapore and the US. Geoff is a video producer, a camera man, an editor, a director and a scriptwriter.

He has a degree in Science majoring in Biochemistry and Pure Mathematics. Achieving this qualification caused Geoff to ask himself what was he doing with his life. Realising he needed to flee from the science lab he headed overseas and spent two winters skiing in France and the summer in between working in Corsica. During this time he was paid to waterski, windsurf, sail, scuba dive, pour beers, drink beers, drive around Corsica, grow watermelons and occasionally electrocute himself.

When not working Geoff can be found on the ski slopes or dressing up as a Pirate - sometimes both at the same time.

Geoff has been a radio announcer and has two children, Cassie and Max.

Geoff presents engaging workshops and speaks at conferences to help businesses achieve greater impact and value from their videos.

1. Shoot Me Now (Paperback or Softback)