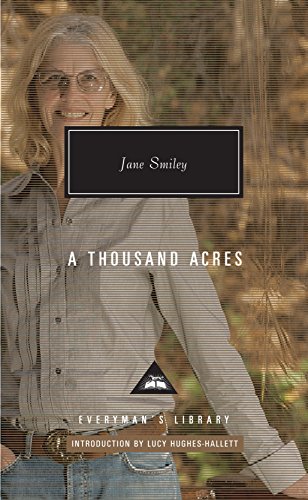 The only hardcover edition of Jane Smiley's most famous novel--King Lear on an Iowa farm--which won the Pulitzer Prize in 1992. EVERYMAN'S LIBRARY CONTEMPORARY CLASSICS. With a new introduction.

This powerful twentieth-century reimagining of Shakespeare's King Lear centers on a wealthy Iowa farmer who decides to divide his farm among his three daughters. When the youngest objects, she is cut out of his will, which sets in motion a chain of events that brings dark truths to light. Ambitiously conceived and stunningly written, A Thousand Acres spins the most fundamental themes of truth, justice, love, and pride into a universally acclaimed masterpiece.

Aging Larry Cook announces his intention to turn over his 1,000-acre farm--one of the largest in Zebulon County, Iowa--to his three daughters, Caroline, Ginny and Rose. A man of harsh sensibilities, he carves Caroline out of the deal because she has the nerve to be less than enthusiastic about her father's generosity. While Larry Cook deteriorates into a pathetic drunk, his daughters are left to cope with the often grim realities of life on a family farm--from battering husbands to cutthroat lenders. In this winner of the 1991 National Book Critics Circle Award for Fiction, Smiley captures the essence of such a life with stark, painful detail.

“A family portrait that is also a near-epic investigation into the broad landscape, the thousand dark acres of the human heart. . . . The book has all the stark brutality of a Shakespearean tragedy.” —The Washington Post Book World

“Superb. . . . There seems to be nothing Smiley can’t write about fabulously well.” —San Francisco Chronicle

“It has been a long time since a novel so surprised me with its power to haunt. . . . A Thousand Acres [has] the prismatic quality of the greatest art.” —Chicago Tribune

“A full, commanding novel. . . . A story bound and tethered to a lonely road in the Midwest, but drawn from a universal source. . . . Profoundly American.” —The Boston Globe