Items related to The Year Of Decision, 1846

DeVoto, Bernard The Year Of Decision, 1846 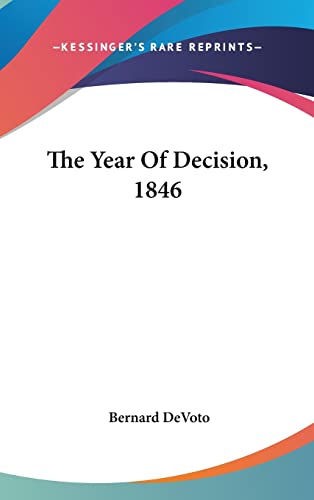 DeVoto winner of the Pultizer Prize and the National Book Award, was a renowned scholar-historian.

“In the first volume of the trilogy, Devoto made 1846 the 'year of the decision.' The reason was that it was in 1846 that America began a war with Mexico that would lead to the annexation of New Mexico, Arizona, and California; and that America settled a long-smoldering dispute with Great Britain and became sovereign in Oregon, thus beginning the process of making the Southwest and West Coast into a part of the American Republic. It was also a peak year in the emigration across the plains and mountains.” ―Stephen E. Ambrose, from the Introduction

“Bernard DeVoto has woven a pattern of history more meaningful than any of its strands... This rare combination of the scholar's accuracy, the novelist's creative vision, and the historian's insight has won him a distinguished place among American historians.” ―Garrett Mattingly, author of The Armada