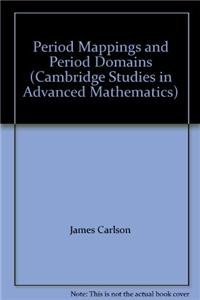 The concept of a period of an elliptic integral goes back to the 18th century. Later Abel, Gauss, Jacobi, Legendre, Weierstrass and others made a systematic study of these integrals. Rephrased in modern terminology, these give a way to encode how the complex structure of a two-torus varies, thereby showing that certain families contain all elliptic curves. Generalizing to higher dimensions resulted in the formulation of the celebrated Hodge conjecture, and in an attempt to solve this, Griffiths generalized the classical notion of period matrix and introduced period maps and period domains which reflect how the complex structure for higher dimensional varieties varies. The basic theory as developed by Griffiths is explained in the first part of the book. Then, in the second part spectral sequences and Koszul complexes are introduced and are used to derive results about cycles on higher dimensional algebraic varieties such as the Noether-Lefschetz theorem and Nori's theorem. Finally, in the third part differential geometric methods are explained leading up to proofs of Arakelov-type theorems, the theorem of the fixed part, the rigidity theorem, and more. Higgs bundles and relations to harmonic maps are discussed, and this leads to striking results such as the fact that compact quotients of certain period domains can never admit a Kahler metric or that certain lattices in classical Lie groups can't occur as the fundamental group of a Kahler manifold.

The concept of a period of an integral goes back to the 19th century;it has been introduced by Legendre and Weierstra^D^ss for integrals ofcertain elliptic functions over certain closed circuits in thedissected complex plane. Rephrased in modern terminology, theseintegrals encode how the complex structure of an elliptic curvevaries. Griffiths generalized this idea and introduced period maps andperiod domains which reflect how the complex structure for higherdimensional varieties varies. These concepts and their basicproperties are discussed in the first part of the book. The algebraicaspects of this construction are investigated in the second part andbring the reader to the forefronts of research in cycletheory. In the third part differential geometrical aspects are studiedin detail and lead to another frontier of research in complexgeometry: Higgs bundles and harmonic theory.

James Carlson is Professor Emeritus at the University of Utah. From 2003 to 2012, he was president of the Clay Mathematics Institute, New Hampshire. Most of Carlson's research is in the area of Hodge theory.