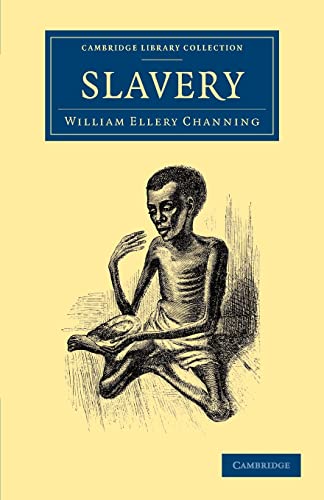 In the years preceding the American Civil War, religion was at the heart of the debate over slavery. William Ellery Channing (1780-1842) had rejected the strict Calvinism of his background to become the leading Unitarian spokesman and preacher, and in later life he began to address the subject of slavery. Published in 1836, this work was Channing's most substantial contribution to the debate, revealing the real difficulties men such as Channing had in questioning a practice with which they had grown up. He vacillates between contempt for the institution and empathy for the slaveholders, writing, 'I do not intend to pass sentence on the character of the slave-holder.' He sees black slaves as humans, but not of equal status with white people. The final chapter is particularly prescient: 'There is a great dread ... that the union of the States may be dissolved by the conflict about slavery.'

Published in 1836, this work by the Unitarian preacher William Ellery Channing (1780-1842) reveals the difficulties he had in questioning a practice with which he had grown up. Although firmly against the institution of slavery, he thought slaves incapable of governing themselves, and slaveholders deserving of consideration and patience.

William Ellery Channing (1780 – 1842) was the foremost Unitarian preacher in the United States in the early nineteenth century and along with Andrews Norton, (1786-1853), one of Unitarianism's leading theologians. He was known for his articulate and impassioned sermons and public speeches, and as a prominent thinker in the liberal theology of the day. Channing's religion and thought were among the chief influences on the New England Transcendentalists, though he never countenanced their views, which he saw as extreme. The beliefs he espoused, especially within his "Baltimore Sermon" of May 5, 1819, at the ordination of a future famous theologian and educator in his own right, Jared Sparks, (1789-1866), as the first minister (1819-1823) of the newly organized (1817) "First Independent Church of Baltimore" (later the "First Unitarian Church of Baltimore (Unitarian and Universalist)"). Here he espoused his principles and tenets of the developing philosophy and theology of "Unitarianism" resulted in the organization later in 1825 of the first Unitarian denomination in America (American Unitarian Association) and the later developments and mergers between Unitarians and Universalists resulting finally in the Unitarian Universalist Association of America in 1961. In later years Channing addressed the topic of slavery, although he was never an ardent abolitionist. Channing wrote a book in 1835, entitled, "SLAVERY" James Munroe and Company, publisher. Channing, however, has been described as a "romantic racist" in "Black Abolitionism: A Quest for Human Dignity" by Beverly Eileen Mitchell (133–38). He held a common American belief about the inferiority of African people and slaves and held a belief that once freed, Africans would need overseers. The overseers (largely former slave masters) were necessary because the slaves would lapse into laziness. Furthermore, he did not join the abolitionist movement because he did not agree with their way of conducting themselves, and he felt that voluntary associations limited a person's autonomy. Therefore, he often chose to remain separate from organizations and reform movements. This middle position characterized his attitude about most questions, although his eloquence and strong influence on the religious world incurred the enmity of many extremists. Channing had an enormous influence over the religious (and social) life of New England, and America, in the nineteenth century.

Book Description 2013. Paperback. Condition: NEW. 9781108053150 This listing is a new book, a title currently in-print which we order directly and immediately from the publisher. For all enquiries, please contact Herb Tandree Philosophy Books directly - customer service is our primary goal. Seller Inventory # HTANDREE0495935