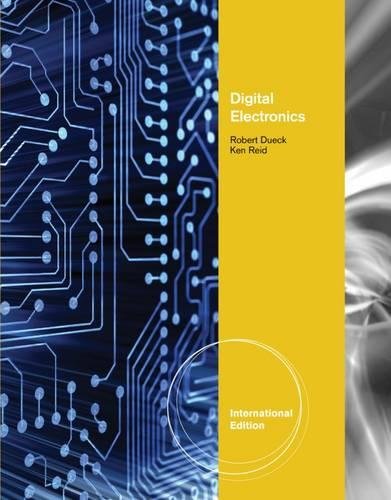 DIGITAL ELECTRONICS, International Edition is your all-in-one guide to the exciting world of digital electronics, from basic electrical theory and digital logic to hands-on, high-tech applications. Designed to support Project Lead the Way's (PLTW) innovative DE course, this dynamic text prepares you for college and career success in STEM, (Science, Technology, Engineering, and Math. The text introduces key concepts such as electrical shop practices and electrical theory, lets you build confidence by exploring key principles and applying what you learn, and helps you develop strong skills in circuit analysis, design, and troubleshooting. A wealth of examples and exercises are included to support your learning, and many feature Multisim integration to help you visualize and analyze circuitsincluding combinational and sequential circuitsbefore you construct them. Other proven learning tools are provided to make mastering the material easier, including self-check problems in every chapter, "Bring it Home" questions covering the basics, and challenging "Extra Mile" problems to help you deepen your understanding and hone your skills. DIGITAL ELECTRONICS is an ideal choice to support your STEM success!

Robert Dueck received his B.Sc. degree in electrical engineering from the University of Manitoba in Winnipeg, Canada, and worked for several years as a design engineer at Motorola Canada in Toronto. He began teaching in 1986, specializing in digital and microcomputer subjects in the Electronics and Computer Engineering Technology programs at Seneca College in Toronto. His first book, Fundamentals of Digital Electronics, was published in 1994, and he has written several additional textbooks. He now teaches digital electronics and related courses at Red River College in Winnipeg. Mr. Dueck is a member of the Association of Professional Engineers and Geoscientists of Manitoba (APEGM) and the Institute of Electrical and Electronics Engineers (IEEE). He served as chair of the Winnipeg Section of IEEE in 2002 and was branch counselor of the Red River College Student Branch from 1997-2006. Ken Reid received his B.S. degree in computer and electrical engineering from Purdue University in 1988 and his M.S.E.E. degree in 1994 from Rose-Hulman Institute of Technology. He was also one of the first in the nation to receive his Ph.D. in engineering education from Purdue University in 2009. Prior to beginning his teaching career in 1996, he worked for the U.S. Navy in electronics manufacturing research. In addition to publishing and presenting in the field, Dr. Reid has extensive experience in teaching digital electronics and computer programming, and he is currently Director of Freshman Engineering at Ohio Northern University. He is a Senior Member of the Institute of Electrical and Electronics Engineers (IEEE) and is active in the American Society of Engineering Education (ASEE).