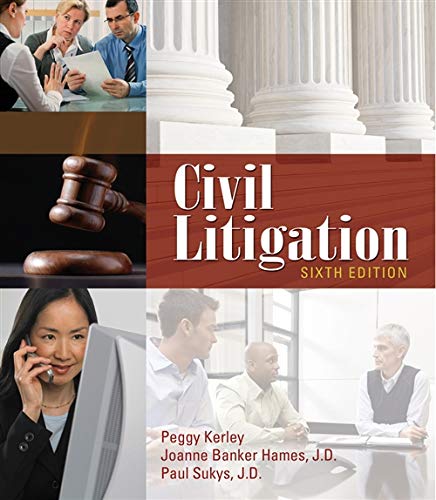 CIVIL LITIGATION, 6th edition enables aspiring paralegals to quickly grasp the principles of litigation practice through practical, hands-on instruction. The Sixth Edition has been updated to include all recent advances in legal practice, including the use of electronically stored information (ESI) and e-forensics in the discovery process. Updates to federal rules and procedures keep the Sixth Edition current and give the reader the most up-to-date information available. In addition, each chapter in CIVIL LITIGATION, 6th edition includes an exercise that focuses on a single case, giving the reader the opportunity to work it from beginning to end, simulating an on-the-job experience. Plus, the Sixth Edition contains a number of sample legal documents, such as complaints, interrogatories and deposition summaries, as well as legal vocabulary indexes. Each chapter focuses briefly on the impact of technology on the litigation field, and also contains useful references to litigation-focused

Peggy N. Kerley is a contract litigation paralegal, recently retired from Sidley Austin LLP in Dallas, Texas. Ms. Kerley received her paralegal certificate from the University of Oklahoma followed by an undergraduate degree in political economy from the University of Texas at Dallas. She has more than 50 years of legal experience and served as a paralegal instructor at Southeastern Paralegal Institute in Dallas, Texas. Ms. Kerley has authored another paralegal textbook, EMPLOYMENT LAW FOR THE PARALEGAL.

Janis Walter, J.D., is a professor of Paralegal Studies at the University of Cincinnati where she coordinates and teaches in the university's ABA-approved paralegal program, a position she has held since 1988. She has served as the chair of the American Bar Association's Approval Commission on Paralegals since 2012 and previously served as a commissioner and on the Standing Committee for Paralegals. In addition, she has chaired and served as the educational representative on many site teams evaluating paralegal programs. An active member of the American Association for Paralegal Education, Professor Walter has developed model syllabi and served as editor of the PARALEGAL EDUCATOR. She has presented at many different forums on topics ranging from teaching effectiveness to handling adoptions. She is also the author of THE OHIO COURTS, widely popular CD case studies covering civil litigation, criminal law, and family law, and developed three learning labs for a virtual law office. Professor Walter holds a bachelor's degree in Political Science and a law degree from Salmon P. Chase College of Law. She is licensed to practice in Kentucky and Ohio and before the United States Supreme Court.

Joanne Banker Hames, J.D., is a retired paralegal coordinator and full-time instructor for the paralegal program at DeAnza Community College in Cupertino, California. She is currently a part-time instructor at the school. She earned her J.D. degree from Santa Clara University School of Law and was admitted to the California Bar in January 1972. She has been an active member since that time. For several years Ms. Hames was employed as an attorney in a busy litigation law firm. During that time she was involved in all aspects of civil litigation, including pre-trial preparation, jury trials and appeals. For the past 14 years she has been involved primarily in paralegal education. She taught at Santa Clara University Paralegal Institute before joining DeAnza Community College.

Paul Sukys, J.D., Ph.D., is a Professor Emeritus of Philosophy, Law, Literature and Legal Studies at North Central State College in Mansfield, Ohio. He has also taught as an adjunct professor at Ashland University, Mount Vernon Nazarene University and Cuyahoga Community College in Cleveland. Dr. Sukys received his bachelor's and master's degrees from John Carroll University in Cleveland, his law degree from Cleveland State University and his doctorate in applied philosophy and art history from The Union Institute and University in Cincinnati. He is a member of the Ohio Bar, the Ohio State Bar Association, the Authors Guild, the National Business Education Association, the Community College Humanities Association and the Lakeside Chautauqua Literary and Scientific Circle.