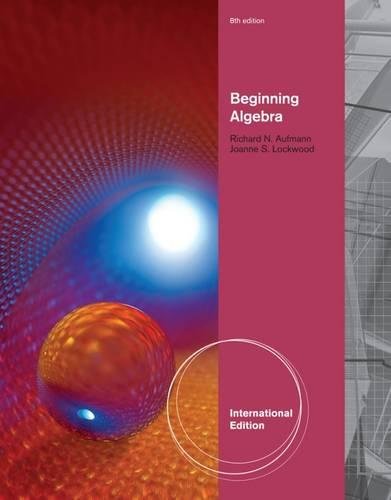 Joanne Lockwood received a BA in English Literature from St. Lawrence University and both an MBA and a BA in mathematics from Plymouth State University. Ms. Lockwood taught at Plymouth State University and Nashua Community College in New Hampshire, and has over 20 years' experience teaching mathematics at the high school and college level. Ms. Lockwood has co-authored two bestselling developmental math series, as well as numerous derivative math texts and ancillaries. Ms. Lockwood's primary interest today is helping developmental math students overcome their challenges in learning math. Richard Aufmann is the lead author of two bestselling developmental math series and a bestselling college algebra and trigonometry series, as well as several derivative math texts. He received a BA in mathematics from the University of California, Irvine, and an MA in mathematics from California State University, Long Beach. Mr. Aufmann taught math, computer science, and physics at Palomar College in California, where he was on the faculty for 28 years. His textbooks are highly recognized and respected among college mathematics professors. Today, Mr. Aufmann's professional interests include quantitative literacy, the developmental math curriculum, and the impact of technology on curriculum development.