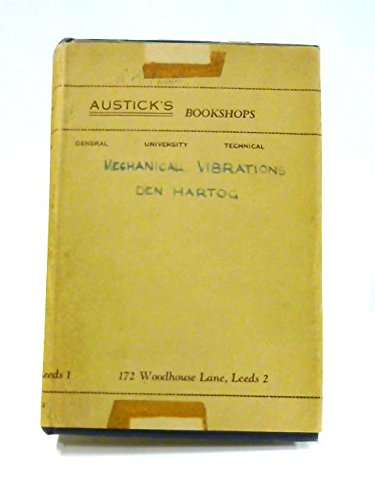 MECHANICAL VIBRATIONS by J. P. DEN HARTOG.Originally published in 1917. PREFACE: This book grew from a course of lectures given to students in the Design School of the Westinghouse Company in Pittsburgh, Pa., in the period from 1926 to 1932, when the subject had not yet been introduced into the curriculum of our technical schools. From 1932 until the beginning of the war, it became a regular course at the Harvard Engineering School, and the book was written for the purpose of facilitating that course, being first published in 1934. In its first edition, it was influenced entirely by the authors industrial experience at Westinghouse the later editions have brought modifications and additions suggested by actual problems published in the literature, by private consulting practice, and by service during the war in the Bureau of Ships of the U. S. Navy. The book aims to be as simple as is compatible with a reason ably complete treatment of the subject. Mathematics has not been avoided, but in all cases the mathematical approach used is the simplest one available. In the third edition the number of problems has again been increased, while the principal changes in the text concern subjects in which recent advances have been made, such as airplane wing flutter, helicopter ground vibration, torsional pendulum dampers, singing ships propellers, and electronic instruments. The author expresses his gratitude to the many readers who have written him calling attention to errors and making sugges tions for improvements and hopes that readers of this third edition will also offer suggestions. J P. DEN HAIITOG. CAMBRIDGE, MASS., January, 1947. Contents include: PREFACE. . . LIST OF SYMBOLS CHAPTER I KINEMATICS OF VIBRATION 1. Definitions . 2. The Vector Method of Representing Vibrations 3. Beats 4. A Case of Hydraulic-turbine Penstock Vibration tS 5. Representation by Complex Numbers 11 6. Work Done on Harmonic Motions. . . . . . 14 7. Non-harmonic Periodic Motions. . . . . . 19 CHAPTER II THE SINGLE DEGREE OF FREEDOM SYSTEM 8. Degrees of Freedom 34 9. Derivation of the Differential Equation , 36 10. Other Cases 38 11. Free Vibrations without Damping 43 12. Examples 47 13. Free Vibrations with Viscous Damping . ... 51 14. Forced Vibrations without Damping ... .57 15. Forced Vibrations with Viscous Damping. .... 63 16. Frequency Measuring Instruments. ... ... 72 17. Seismic Instruments .75 18. Electrical Measuring Instruments ... . SO 19. Theory of Vibration Isolation .... ... S9 20. Application to Single-phase Electrical Machinery 92 21. Application to Automobiles Floating Power 96 CHAPTER III Two DEGREES OF FREEDOM 22. Free Vibrations Natural Modes 103 23. The Undamped Dynamic Vibration Absorber 112 24. The Damped Vibration Absorber .119 viii CONTENTS 25. Ship Stabilization by Means of Frahms Tanks 133 26. Gyroscopic Ship Stabilizers 139 26a. Activated Ship Stabilizers 142 27. Automobile Shock Absorbers 145 CHAPTER IV MANY DEGREES OF FREEDOM 28. Free Vibrations without Damping 155 29. Forced Vibrations without Damping 160 30. Free and Forced Vibration with Damping 165 31. Strings and Organ Pipes Longitudinal and Torsional Vibra tions of Uniform Bars 170 32. Rayleighs Method 178 33. Bending Vibrations of Uniform Beams 185 34. Beams of Variable Cross Section 194 35. Normal Functions and Their Applications 198 35a. Stodolas Method for Higher Modes 202 36. Rings, Membranes, and Plates 205 CHAPTER V MULTICYLINDER ENGINES 37. Troubles Peculiar to Reciprocating Engines 213 38. Dynamics of the Crank Mechanism 217 39...

J. P. Den Hartog: The Reprint Engineer
J. P. Den Hartog (1901–1989), who taught for most of his career at MIT, was one of the founders of the Dover reprint program in engineering. As the author of several books that Dover reprinted and still has in print, and as an advisor from the 1950s until just a few years before his death in 1989, Professor Den Hartog gave invaluable advice concerning books of lasting interest and importance in his field.

Not many books in engineering have a productive shelf life spanning several decades. Among the exceptions are these four books of Professor Den Hartog, which Dover reprinted and occasionally revised in later printings from 1961 through 1987: Mechanics, 1961, Strength of Materials, 1961, Mechanical Vibrations, 1985, and Advanced Strength of Materials, 1987. Still widely read and cited by authors in these areas, Den Hartog's books are a tribute to his gift for exposition and clarity.

The J. P. Den Hartog Award, established in 1987, is presented in recognition of lifetime contributions to the teaching and practice of vibration engineering.