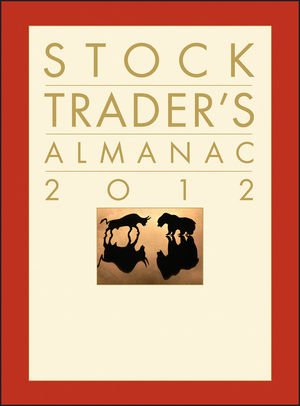 Published every year since 1968, the Stock Trader's Almanac is a practical investment tool with a wealth of information organized in calendar format. Everyone from well-known money managers to savvy traders and investors relies upon this annual resource for its in-depth analyses and insights. The Stock Trader's Almanac 2012 contains essential historical price information on the stock market, provides monthly and daily reminders, and highlights seasonal trading opportunities and dangers.

The Stock Trader's Almanac 2012 is packed with timely insights and targeted analysis to help you navigate turbulent markets and beat the odds in the year ahead. This trusted guide combines over a century's worth of data, statistics, and trends along with vital analysis you won't get anywhere else. The 2012 edition includes a revision of the Seasonal Switching Strategy that significantly boosts returns as well as new information on the coming Super Boom. Other key seasonal and cyclical updates include pre-presidential election year cycles and perspectives, how the government manipulates the economy to stay in power, incumbent victories vs. incumbent defeats, and the market impact of the lame duck year.

For its wealth of information and the authority of its sources, the Stock Trader's Almanac stands alone as the guide to intelligent investing.

What is the biggest trend in the markets to watch for 2012 and how can investors prepare for it?
Outside of the four-year cycle, sovereign debt concerns remain a major obstacle to markets in 2012. Beyond the threat of credit rating downgrades, any further austerity measures enacted to balance budgets could potentially cause severe damage to what has been a fragile economic recovery.

What differentiates the Stock Trader's Almanac approach to investing from other approaches out in the market?
Beyond our 45 year history, our research of seasonal patterns and cycles does not bind our readers to one corner of the market. Our research can be applied in nearly any trading strategy. Whether trading individual stocks or options on an index futures contract, our analysis can provide traders with an edge. Quote: "If the market does not rally, as it should during bullish seasonal periods, it is a sign that other forces are stronger and that when the seasonal period ends these forces will really have their say." —Edson Gould

The Almanac is often quoted in the media and is famously known for a few key indicators that you follow. What are these indicators and how can investors trade them?
Two of our widely known indicators are the January Barometer and the "Best Six Months". The January Barometer simply states: "As January goes, so goes the year." The January Barometer can only be applied to markets going back to the passage of the 20th Amendment to the U.S. Constitution, the "lame duck" amendment. It made January a politically significant month in addition to the importance of being the first month of the New Year. Strength in January is a positive sign that can be used to increase long market exposure. Down Januarys on the other hand are negative omens. Every down January since 1950 was followed by a new or continuing bear market, a 10% or greater correction, or a flat year. A substantial amount of our research and trading advice revolves around the market’s "Best Six Months". What our research has shown is that the market makes the bulk of its gains in just six months of the year, November through April, hence the roots of "Sell in May". Traders and investors can enjoy the bulk of the gains with half the risk of buy and hold. The key to the “Best Six Months” for investors is to look for technical buying opportunity in October ahead of the usually bullish period and a selling opportunity in April or May.

Last year you came out with Super Boom prediction for a coming market boom. Has the fluctuating market changed this prediction at all? Will the 2012 Almanac discuss this prediction?
Yes we do cover the prediction in the 2012 Almanac and No the prediction has not changed. In our 2011 Annual Forecast sent to our subscribers in December 2010 we forecasted an early 2011 DJIA high in the 13000-14000 range. DJIA peaked in April at 12810. We also forecast a correction of 15-20%. From its April high to its October low, DJIA declined 16.8%. For full-year 2011 we forecast gains of 5-10% for the DJIA, which we still expect. This forecast was integrated into the Fifteen Year Projection chart found on page 74 of the Stock Trader’s Almanac 2012.

Trends to Watch and Trade in 2012
By Jeffery Hirsh, Editor-in-Chief, of Stock Trader’s Almanac

Presidential elections every four years have a profound impact on the economy and the stock market. Wars, recessions and bear markets tend to start or occur in the first half of the term; prosperous times and bull markets, in the latter half. After nine straight annual Dow gains during the millennial bull, the four-year election cycle reasserted its overarching domination of market behavior the last 11 years. However, 2008 was the worst presidential election year on record.

Only Two Losses In Last Seven Months Of Election Years
Regardless which Party is victorious, the last seven months have seen gains on the S&P 500 in 13 of the 15 presidential election years since 1950. One loss was in 2000 when the election's outcome was delayed for 36 tumultuous days, though the Dow did gain ground in the last seven months of 2000. Financial crisis and the worst bear market since the Great Depression impacted 2008.

First Five Months Better When Party Retains White House
Since 1901 there have been 27 presidential elections. When the Party in power retained the White House 16 times, the Dow was up 1.5% on average for the first five months, compared to a 4.6% loss the 11 times the Party was ousted. Since 1950, retaining the White House 7 times brought an average gain of 1.9% compared to –0.1% the other 8 times.

War Can Be A Major Factor In Presidential Races
Democrats used to lose the White House on foreign shores (1920 WW1, 1952 Korea, 1968 Vietnam, 1980 Iran Crisis). Republicans on the other hand lost it here at home (1912 Party split, 1932 Depression, 1960 Economy, 1976 Watergate). Homeland issues dominated elections the last three decades with the Republican loss in 1992 (Economy), and the Democratic loss in 2000 (Scandal), and the Republican loss in 2008 (Economy). As we've learned over the years, it all depends on who the candidates are in 2012.

Only Six Election Year Declines Greater Than 5% Since 1896
Presidential election years are the second best performing year of the four-year cycle. Incumbent parties lost power in five of the six years with declines greater than 5%. Five losses occurred at the end of the second term. FDR defeated Hoover in 1932 and was re-elected to an unprecedented third term as WWII ravaged Europe. Election year 2012 marks the end of the incumbent party’s first term, improving the prospects for a solid year.

"Historical price patterns continue to work because human nature doesn't change, and neither does the law of supply and demand. Study past successful stocks if you want to know what future ones will look like. Stock Trader's Almanac is all about historical facts."
—William J. O'Neil, Chairman and founder, Investor's Business Daily

"All my almost four decades in professional investing, I've found this annual tour de force fascinating. There is a lot of provocative here to whet your whistle and adrenaline-rush your curiosity. If you don't find something here that tickles your mind, you probably don't have one."
—Ken Fisher, CEO and founder, Fisher Investments, 25-year Forbes columnist, and author of The Only Three Questions That Count and How to Smell a Rat

"The Stock Trader's Almanac is a treasure-trove of solid gold investment nuggets. No serious trader should have it far from his hands."
—John Mauldlin, author of Bull's Eye Investing and Thoughts from the Frontline

"A venerable guide for Wall Street's farmers to plant and harvest investments according to the season."
—Jonathan Burton, MarketWatch

"Whether I am researching seasonality trends or old Wall Street sayings, or am simply in need of some good old-fashioned investment horse sense, I start with the Stock Trader's Almanac. I have been a student of Yale and Jeffrey Hirsch's Almanac research for years, and look forward to future lessons."
—Sam Stovall, Chief Investment Strategist, Standard & Poor's Equity Research