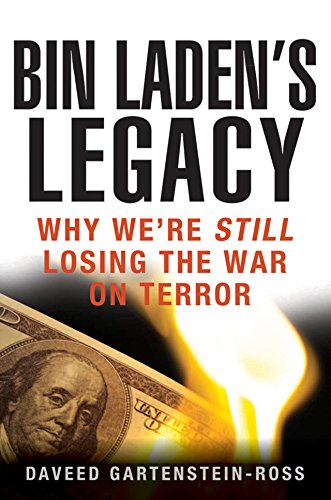 In the decade since 9/11, the United States has grown weaker: It has been bogged down by costly wars in Iraq and Afghanistan. It has spent billions of dollars on security to protect air travel and other transport, as well as the homeland more generally. Much of this money has been channeled into efforts that are inefficient by design and highly bureaucratic, a lack of coordination between and among the government and an array of contractors making it difficult to evaluate the return on the enormous investment that we have made in national security. Meanwhile, public morale has been sapped by measures ranging from color-coded terror alerts to full-body hand searches.

Now counterterrorism expert Daveed Gartenstein-Ross details the strategic missteps the U.S. has made in the fight against al Qaeda, a group that U.S. planners never really took the time to understand. For this reason, America's responses to the terrorist threat have often unwittingly helped al Qaeda achieve its goals. Gartenstein-Ross's book explains what the country must do now to stem the bleeding.

Clearly written and powerfully argued by a prominent counterterrorism expert, this book is essential reading for anyone who wants to understand what al Qaeda is really after and how the United States can thwart its goals—or help unwittingly to achieve them.

"Daveed Gartenstein-Ross has written an analytically sharp, fluidly written account of al Qaeda and its affiliates in the post–bin Laden era. It makes for sobering and essential reading."
—Peter Bergen, author of The Longest War: The Enduring Conflict between America and Al Qaeda

"Bin Laden's Legacy is an important and timely work, especially in the aftermath of bin Laden's killing. It is one of the few books to probe systematically the movement's strategy and its effect on the U.S. and its allies. Daveed Gartenstein-Ross is to be commended for his insightful analysis, and his sound policy recommendations will be of interest to scholars and policymakers alike."
—Bruce Hoffman, Director, Center for Peace and Security Studies, Georgetown University

"By an astute and penetrating analysis of al Qaeda's strategy, Daveed Gartenstein-Ross unveils the potentially devastating flaws in U.S. strategy. His recommendations must be seriously considered by policymakers and all Americans concerned with their nation's security."
—Steven Metz, U.S. Army War College Strategic Studies Institute; author of Iraq and the Evolution of American Strategy

"This book is an important contribution to the post–bin Laden debate about how to fight terrorism smarter and cheaper at a time of constraints on America's power and purse."
—Clark Kent Ervin, former Inspector General of the Department of Homeland Security

"Gartenstein-Ross's provocative arguments should push policymakers to carefully examine their assumptions about the struggle with al Qaeda. Whether you agree with his thesis, Gartenstein-Ross provides a useful counterweight to the mainstream security narrative in Washington."
—Congressman Hank Johnson (D.-Georgia), House Armed Services Committee

"Gartenstein-Ross has written an informative, contrarian, and crisply written study of al Qaeda and the U.S. response, exploring not only Iraq and Afghanistan but also important but neglected issues such as the economic dimensions of al Qaeda's strategy and the politics of U.S. counterterrorism."
—Daniel Byman, Professor, Edmund A. Walsh School of Foreign Service, Georgetown University

"A deeply researched and riveting account of the evolutionary strategy of al Qaeda and why the death of bin Laden is simply 'the end of the beginning.' Gartenstein-Ross's extraordinary work provides valuable insight on the adaptive capacity and international complexities of this non–state sponsored transnational threat, which has been able to engage in a war with the world's remaining superpower. Truly a must-read!"
—Erroll G. Southers, Adjunct Professor, University of Southern California and Associate Director, Center for Risk and Economic Analysis of Terrorism Events

Despite the death of Osama bin Laden, al Qaeda remains a significant threat because bin Laden's strategy for combating the United States—sapping its economic and military strength while expanding the battlefield on which America has to fight—lives on. In fact, this strategy has evolved over the past decade, it's working, and because U.S. planners never took the time to understand it, many of our responses have actually helped al Qaeda achieve its goals while undermining our own.

In Bin Laden's Legacy, counterterrorism expert Daveed Gartenstein-Ross explains why al Qaeda's "death by a thousand cuts" strategy has been effective. He shows how such well-publicized plots as the "underwear bomber" and printer cartridge bombs achieved their primary goals, despite being foiled. He notes how we have played into al Qaeda's hands with two costly, unpopular wars and by setting up an expensive homeland security bureaucracy that has difficulty dealing with a nimble, adaptive foe. He explains how many of our antiterrorism efforts are inefficient by design, suffer from a lack of coordination between the government and an array of contractors, and lack any obvious means to evaluate the return on our enormous investment in them. He explores how domestic politicization of the terrorist threat has skewed U.S. priorities, led to the misallocation of counterterrorism resources, and created flawed counterterrorism paradigms and bad policies. Meanwhile, public morale has been weakened by measures ranging from color-coded terror alerts to invasive, full-body searches in airports.

If bin Laden's death is to truly represent a turning point in the war on terror, it won't be due just to his importance to al Qaeda. It will be because his death allowed the United States to reevaluate its paradigms for protecting itself from and defeating this adversary. But to do so, it is first necessary to understand the key errors that the country has made along the way and why these mistakes occurred. Gartenstein-Ross shows what we've done wrong, then proposes a practical plan to start doing right.

For if we mistakenly believe that bin Laden's death signifies the end of al Qaeda's threat, or that it vindicates our previous policies, bin Laden may well experience even greater success in death than he ever did while among us.

Book Description Hardcover. Condition: New. Hardcover. Why al Qaeda is winning its war against the West--and America has been playing right into its hands In the decade since 9/11, the United States has grown weaker: It has been bogged down b.Shipping may be from multiple locations in the US or from the UK, depending on stock availability. 279 pages. 0.449. Seller Inventory # 9781118094945