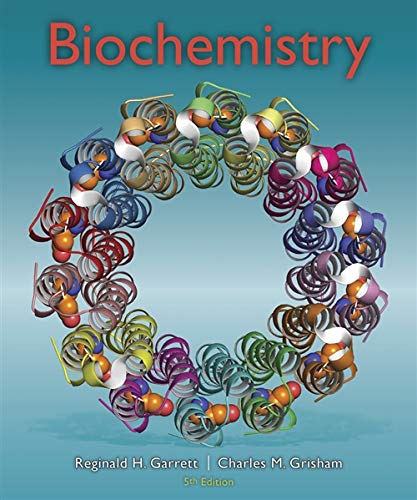 Succeed in the course with BIOCHEMISTRY. The authors' innovative conceptual and organizing "Essential Questions" framework guides you through course concepts in a way that reveals the beauty and usefulness of biochemistry in the everyday world. Offering a balanced and streamlined presentation, this edition has been updated throughout with new material and revised presentations. This book is integrated with OWL, a powerful online learning system for chemistry that will help you improve your grades and master course concepts.

Reginald H. Garrett was educated in the Baltimore city public schools and at the Johns Hopkins University, where he received his Ph.D. in biology in 1968. Since that time, he has conducted research and taught biochemistry courses at the University of Virginia, where he is currently Professor of Biology. He is the author of numerous papers and review articles on biochemical, genetic, and molecular biological aspects of inorganic nitrogen metabolism. His early research focused on the pathway of nitrate assimilation in filamentous fungi. His investigations contributed substantially to our understanding of the enzymology, genetics, and regulation of this major pathway of biological nitrogen acquisition. More recently, he has collaborated in systems approaches to the metabolic basis of nutrition-related diseases. His research has been supported by grants from the National Institutes of Health, the National Science Foundation, and private industry. A member of the American Society for Biochemistry and Molecular Biology, Garrett is a former Fulbright Scholar, was twice Visiting Scholar at the University of Cambridge, and was Invited Professor at the University of Toulouse, France.

Charles M. Grisham received his B.S. in chemistry from the Illinois Institute of Technology in 1969 and his Ph.D. in chemistry from the University of Minnesota in 1973. Following a postdoctoral appointment at the Institute for Cancer Research in Philadelphia, he became Professor of Chemistry at the University of Virginia, where he teaches biochemistry, introductory chemistry, and physical chemistry. He has authored numerous papers and review articles on active transport of sodium, potassium, and calcium in mammalian systems, on protein kinase C, and on the applications of NMR and EPR spectroscopy to the study of biological systems. His work has been supported by the National Institutes of Health, the National Science Foundation, the Muscular Dystrophy Association of America, the Research Corporation, the American Heart Association and the American Chemical Society. A member of the American Society for Biochemistry and Molecular Biology, Grisham held the Knapp Chair in Chemistry in 1999 at the University of San Diego; was Visiting Scientist at the Aarhus University Institute of Physiology, Aarhus, Denmark, for two years; and received a Research Career Development Award from the National Institutes of Health.