Items related to The Fatal Conceit: The Errors of Socialism

Hayek, F.A. The Fatal Conceit: The Errors of Socialism

The Fatal Conceit: The Errors of Socialism 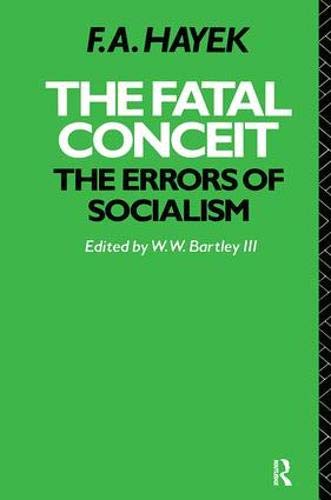 First published in 1990. Routledge is an imprint of Taylor and Francis, an informa company.

Adopting an economic and evolutionary approach throughout, Hayak examines the nature, origin, selection and development of the differing moralities of socialism and the market order; he recounts the extraordinary powers that 'the extended order' of the market, as he calls it, bestows on mankind, constituting and enabling the development of civilization.

F. A. Hayek (1899-1992), recipient of the Medal of Freedom in 1991 and co-winner of the Nobel Memorial Prize in Economics in 1974, was a pioneer in monetary theory and a leading proponent of classical liberalism  in the twentieth century. He taught at the University of London, the University of Chicago, and the University of Freiburg.

1. The Fatal Conceit: The Errors of Socialism (Hardback)

Shipping: US$ 34.36
From United Kingdom to U.S.A.
Destination, rates & speeds