Items related to A manual of the Nellore District in the Presidency... 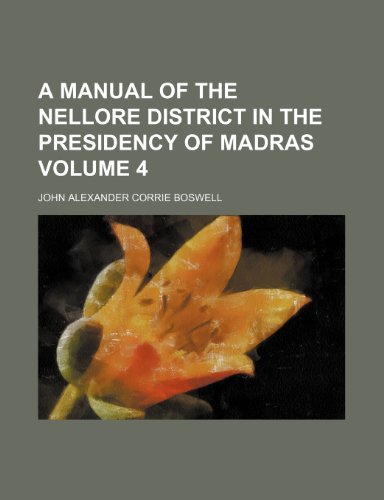 This historic book may have numerous typos and missing text. Purchasers can download a free scanned copy of the original book (without typos) from the publisher. Not indexed. Not illustrated. 1873 Excerpt: ...systems of cultivation, the crops are not collectively met with. Where variga is cultivated, it invariably occupies the largest area of any crop, and the land is usually divided pretty equally between the early or muduru crops sown under the south-west monsoon, and the late or paira crops put down under the north-east monsoon. These crops have already been detailed in the statement exhibiting the different seasons at which the cultivation of each is carried on. The principal crops sown under the south-west monsoon, in what may aptly be termed the variga country, are sazza, peda jonna with pessara and kandi, korra and aruga with cotton, indigo, cotton by itself, and lamp oil; similarly those under the north-east monsoon are variga and horse gram. Under the former the minor crops may be particularized as dry paddy with kandi, and raggi with cotton, and under the latter as coriander, Bengal gram, and paira lamp oil. The rotation observed each year is invariably between the early and the late crops. The chief rotation is between variga and jonna, which command the largest area. Variga may be stated to be put down in land generally cropped the preceding season with either jonna, korra, or raggi, the land being always well ploughed and invariably manured for the variga crop. Jonna is sown in fields under either variga, horse gram, or lamp oil the previous year. The continuous ploughing required by the lamp oil crop admits of another early crop being put on the land the following year, hence lamp oil is succeeded by either sazza, jonna, korra, indigo, or raggi, and from the same cause it can be put down after any crop. The whole of the early crops can follow variga; and the ordinary rotation observed is for each field to be under variga every second or third year....