Items related to The Journal of Geology Volume 18

Geology, University Of Chicago The Journal of Geology Volume 18

The Journal of Geology Volume 18 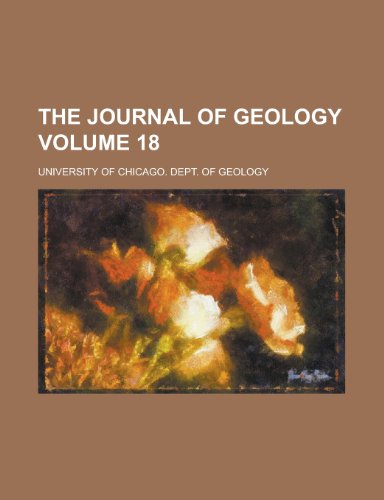 This historic book may have numerous typos and missing text. Purchasers can usually download a free scanned copy of the original book (without typos) from the publisher. Not indexed. Not illustrated. 1910 edition. Excerpt: ...showing evidence of much weathering and age. The classification of the pebbles collected shows the unmistakable Keewatin character of the drift even in the absence of limestone. The abundance of chert suggests the former presence of the calcareous element. This occurrence of western drift is three miles east of the limiting terminal moraine of the Keewatin glacier of the Wisconsin epoch, showing that this earlier Keewatin ice-advance was more powerful than the last. The upper oxidized portion of this old Keewatin drift has now been recognized in limited sections in various other portions of the quadrangle. It has been brought to light in constructing the new railway spur from St. Croix Falls station down to the electric-power dam, and evidences of it have been seen on the Taylor's Falls side of the river. These occurrences suggest that if the entire region had not been buried beneath such heavy deposits of Wisconsin drift this supposed Kansan drift would be found to constitute an important sheet. THE LOWER RED DRIFT In the gully in which the true grayish-black till was first detected no pre-Wisconsin red drift was exposed to view, but in the next ravine to the north there was visible an intensely red, firmly consolidated till, or hardpan, upon which rested a rather ferruginous sand, and above that the fresher-appearing sand and gravel of Wisconsin age. A much better section is afforded by the wide, open ravine in the N.W., Section 15, Franconia (1 miles southeast of Franconia). Near the head of this ravine the gray Keewatin drift of Wisconsin age is seen resting upon the red Wisconsin sands and gravels from Lake Superior and Labrador. Lower down toward the river is a bank of reddish-brown to pinkish-red sandy till which is bright carmine...