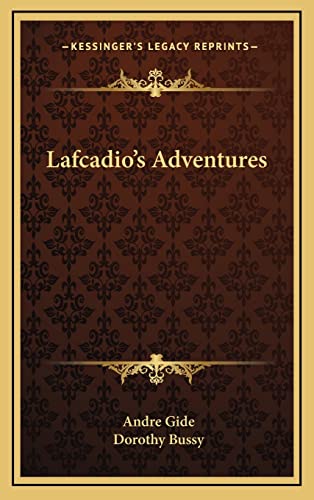 Passing with cinematographic speed across the capitals of Europe, Nobel laureate Andre Gide's Lafcadio's Adventures is a brilliantly sly satire and one of the clearest articulations of his greatest theme: the unmotivated crime.
When Lafcadio Wluiki, a street-smart nineteen-year-old in 1890s Paris, learns that he's heir to an ailing French nobleman's fortune, he's seized by wanderlust. Traveling through Rome in expensive new threads, he becomes entangled in a Church extortion scandal involving an imprisoned Pope, a skittish purveyor of graveyard statuary, an atheist-turned-believer on the edge of insolvency, and all manner of wastrels, swindlers, aristocrats, adventurers, and pickpockets. With characteristic irony, Gide contrives a hilarious detective farce whereby the wrong man is apprehended, while the charmingly perverse Lafcadio--one of the most original creations in all modern fiction--goes free.

“A joy to read. It is beautifully articulated and superbly written. . . . A glorious and satisfying ‘thriller.’ ” —The New York Times

“In a time of intellectual inflation, . . . Gide’s survival can help us to distinguish between the genuine and the counterfeit. . . . There is nothing like the real thing.” —The New Republic

“Full of gusto. . . . The imagination works freely and the plot marches boldly ahead, galloping through the most preposterous situations without breaking its neck.” —New York Herald Tribune