Items related to The Confessions Of A Thug

Philip Meadows Taylor The Confessions Of A Thug

The Confessions Of A Thug 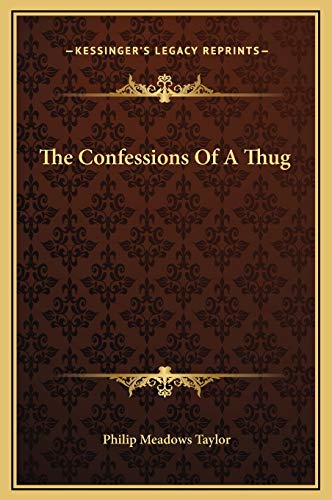 Colonel Philip Meadows Taylor CSI (September 25, 1808 May 13, 1876 in Menton), an administrator and novelist, was born in Liverpool, England.At the age of fifteen he was sent out to India to become a clerk to a Bombay merchant. The merchant was in financial difficulties, though. In 1824, Taylor gladly accepted a commission in the service of the Nizam of Hyderabad, to which service he remained devotedly attached throughout his long career. He was speedily transferred from military duty to a civil appointment, and in this capacity he acquired a knowledge of the languages and the people of southern India which has seldom been equalled. He studied the laws, geology, and the antiquities of the country, being one of the foremost early experts on megaliths.[1] He was alternately judge, engineer, artist, and man of letters. While on furlough in England in 1840, he published the first of his Indian novels, Confessions of a Thug, in which he reproduced the scenes which he had heard about the Thuggee cult, described by the chief actors in them. This book was followed by a series of tales, Tippoo Sultaun (1840), Tara (1863), Ralph Darnell (1865), Seeta (1872), and A Noble Queen (1878), all illustrating periods of Indian history and society, and giving a prominent place to the native character, for which and the native institutions and traditions he had a great regard and respect. Seeta in particular was remarkable for its sympathetic and romantic portrayal of the marriage between a British civil servant and a Hindu widow just before the Indian Mutiny. Taylor himself had married Mary Palmer, the Eurasian granddaughter of William Palmer, the East India Company's Resident at Hyderabad (who had married "one of the Princesses of the Royal House of Delhi").[2] Returning to India he acted from 1840 to 1853 as correspondent for The Times. He also wrote a Student's Manual of the History of India (1870).