Items related to The Magus a Complete System of Occult Philosophy

Barrett, Francis The Magus a Complete System of Occult Philosophy

The Magus a Complete System of Occult Philosophy 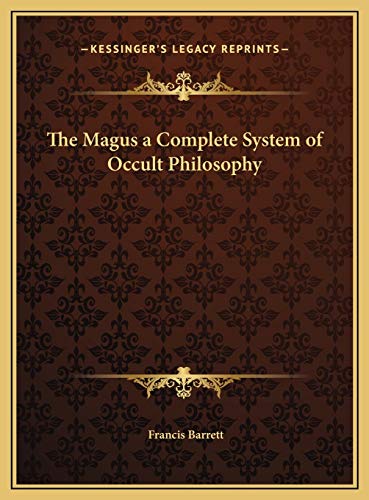 When first published in 1801, The Magus presented a complete study in the practice of ritual magic. It was compiled by Barrett from many different occult sources, such as Agrippa's work, the Heptameron, and various manuscripts of The Key of Solomon, in response to renewed public interest in magic and the ancient, classic texts. As such, it was the first readily accessible English translation, or republication, of rare, long-out-of-print works, and was fundamental for many exploring the Western magic tradition at the dawn of the Victorian Occult Revival. The Magus is actually separated into three books combined in one volume.

Book I covers: Natural Magic -- the occult properties of animals, minerals, and vegetables; including the preparation of charms, potions, "monsters", and sorcery; alchemy -- the Philosopher's Stone and how to make it; transmuting base metals into gold, the origin and history of alchemy including famous alchemists; the nature of the elements, the spirit world, planets, numerology, astrology, and talismanic magic.

Book II covers: the occult powers and uses of magnetism, including an essay on the Weapon Salve; and a comprehensive study of the cabala and ceremonial magic; includes divine names associated with cabala; use of the cabala to contact, summon, and bind spirits; names and descriptions of good and evil spirits along with the numbers, characters, and seals associated with them; construction of magic circles; and ceremonies of consecration, invocation, and conjuration.

Book III is a compilation of biographies of famous magi, cabalists, and philosophers, such as Zoroaster, Albertus Magnus, Doctor Dee, Raymond Lully, and many others.

This facsimile is a photo-reproduction of all three books from the first edition. A renowned and often-referenced classic of the Western Mystery Tradition, it remains a useful foundation for the study and practice of magic.

1. The Magus a Complete System of Occult Philosophy