Items related to Variations in Community Exposure and Sensitivity to...

Variations in Community Exposure and Sensitivity to Tsunami Hazards in the State of Hawaii: Usgs Scientific Investigations Report 2007-5208 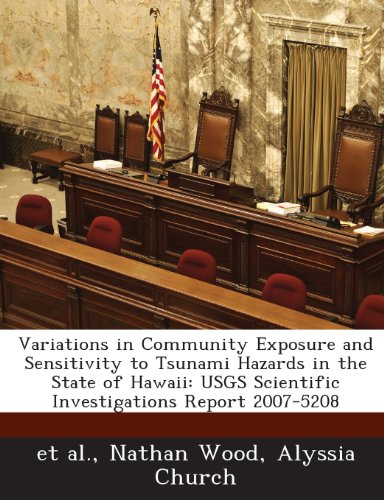 Hawai`i has experienced numerous destructive tsunamis and the potential for future events threatens the safety and economic well being of its coastal communities. Although tsunami-evacuation zones have been delineated, what is in these areas and how communities have chosen to develop within them has not been documented. A community-level vulnerability assessment using geographic-information-system tools was conducted to describe tsunami-prone landscapes on the Hawaiian coast and to document variations in land cover, demographics, economic assets, and critical facilities among 65 communities. Results indicate that the Hawai`i tsunami-evacuation zone contains approximately 56,678 residents (five percent of the total population), 67,113 employees (eleven percent of the State labor force), and 50,174 average daily visitors to hotels (44 percent of the State total). With regards to economic conditions, the tsunami-evacuation zone contains 5,779 businesses that generate $10.1 billion in annual sales volume (both eleven percent of State totals), and tax parcels with a combined total value of $36.1 billion (18 percent of the State total). Although occupancy values are not known for each facility, the tsunami-evacuation zone also contains numerous dependent-population facilities (for example, child-day-care facilities and schools), public venues (for example, religious organizations and parks) and critical facilities (for example, fire stations). The residential population in tsunami-prone areas is racially diverse, with most residents identifying themselves as White, Asian, or Native Hawaiian and Other Pacific Islander, either alone or in combination with one or more race. Fifty-one percent of the households in the tsunami-evacuation zone are renter occupied. The employee population in the tsunami-evacuation zone is largely in accommodation and food services, health services, and retail-trade sectors. Results indicate that community vulnerability, described here by exposure (the amount of assets in tsunami-prone areas) and sensitivity (the relative percentage of assets in tsunami-prone areas) varies considerably among 65 coastal communities in Hawai`i. Honolulu has the highest exposure, Punalu`u has the highest sensitivity, and Ka`anapali has the highest combination of exposure and sensitivity to tsunamis. Results also indicate that the level of community-asset exposure to tsunamis is not determined by the amount of a community's land that is in tsunami-evacuation zones. Community sensitivity, however, is related to the percentage of a community's land that is in the tsunami-prone areas. This report will further the dialogue on societal risk to tsunami hazards in Hawai`i and help identify future preparedness, mitigation, response, and recovery planning needs within coastal communities and economic sectors of the State of Hawai`i.