Items related to Night Star: A Novel (The Immortals, 5)

Night Star: A Novel (The Immortals, 5) 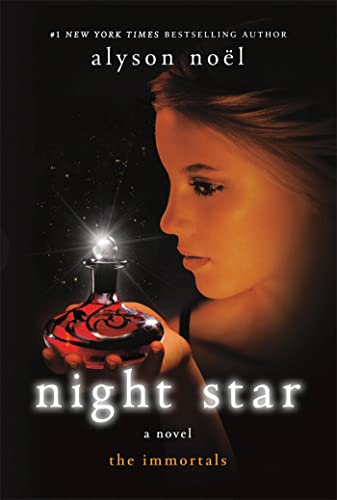 After fighting for centuries to be together, Immortals Ever and Damen's future hinges on one final showdown that will leave readers gasping for breath. Don't miss Night Star-- the explosive new installment of Alyson Noel's #1 bestselling Immortals series that's enchanted millions across the world!

Haven still blames Ever for the death of her boyfriend Roman, no matter how hard Ever's tried to convince her it was an accident. Now she's determined to take Ever down...and destroy Damen and Jude along the way. Her first step is to tear Ever and Damen apart―and she has just the ammunition to do it.
Hidden in one of Ever's past lives is a terrible secret about Damen―a secret that illuminates new facts about her relationship with Jude, but that's so dark and brutal it might be enough to drive her and Damen apart once and for all. As Ever faces her greatest fears about the guy she wants to spend eternity with, she's thrust into a deadly clash with Haven that could destroy them all.
Now it'll take everything she's got―and bring out powers she never knew she had―to face down her most formidable enemy. But in order to win, she must first ask herself: is her own survival worth dooming Haven to an eternity of darkness in the Shadowland? And will learning the truth about Damen's past hold the key to their future?

Product Description
With 2 million copies of her Immortals series in print, Alyson Noël is one of the hottest paranormal teen authors writing today. Night Star continues the epic love story that has enchanted readers across the world.  In this installment, Ever and Damen face down bitter rivals, jealous friends and their own worst fears—all in the hope of being together forever. Night Star is guaranteed to mesmerize fans and leave them breathlessly awaiting the sixth and final book!

I love to read—it’s one of my favorite ways to unwind. But this last year I’ve been so busy working on The Immortals books along with the spin-off series beginning with Radiance that I haven’t had a whole lot of down time for recreational reading. That said, I have managed to sneak in a few great reads such as:

Cryer’s Cross by Lisa McMann, Silver Phoenix by Cindy Pon, When You Reach Me by Rebecca Stead, Karma Club by Jessica Brody, Forgive My Fins by Tera Lynn Childs, Lifted by Wendy Toliver, When The Stars Go Blue by Caridad Ferrer, Songs for a Teenage Nomad by Kim Culbertson, and White Cat by Holly Black.

But despite not having a lot of free time for reading that doesn’t stop me from buying books, which means my TBR pile is nearly out of control! Some of the books that are waiting for me that I can’t wait to dig into are:

Halo by Alexandra Adornetto, The Duff by Kody Kepliner, Matched by Allie Condie, the Sookie Stackhouse series by Charlaine Harris, The Particular Sadness of Lemon Cake by Aimee Bender, the entire Harry Potter series by J.K. Rowling, The Girl With The Dragon Tattoo by Stieg Larsson...to name just a few!

Alyson Noël is the #1 New York Times bestselling, award-winning author of Faking 19, Art Geeks and Prom Queens, Laguna Cove, Fly Me to the Moon, Kiss & Blog, Saving Zoë, Cruel Summer, and the Immortals series including Evermore, Blue Moon, Shadowland, Dark Flame, and Night Star, as well as the Immortals spin-off series beginning with Radiance. With over 2 million copies in print in the US alone, her books have been published in 35 countries and have won awards including the National Reader's Choice Award, NYLA Book of Winter Award, NYPL Stuff for the Teenage, TeenReads Best Books of 2007, and Reviewer's Choice 2007 Top Ten, and have been chosen for the CBS Early Show's "Give the Gift of Reading" segment, and selected for Seventeen Magazine's "Hot List" and Beach Book Club Pick. She lives in Laguna Beach, California.

1. Night Star: A Novel (The Immortals)

2. Night Star: A Novel (The Immortals)