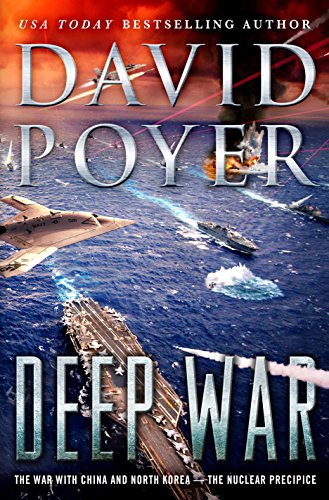 The war against China turns dire, as the United States struggles to survive in this gripping thriller featuring Navy commander Dan Lenson

But as the campaign begins, the entire Allied military and defense network is compromised―even controlled―by Jade Emperor, a powerful Chinese artificial intelligence system that seems to anticipate and counter every move. While Dan strives to salvage the battle plan, his wife Blair helps coordinate strategy in Washington, DC, Marine sergeant Hector Ramos fights in an invasion of Taiwan, and Navy SEAL master chief Teddy Oberg begins a desperate journey into central China on a mission that may be the only way to save the United States from destruction and defeat.

Thrilling, filled with near-future technology, and deeply grounded in the human cost of war, David Poyer's Deep War is a brilliant novel by an acknowledged master of military fiction.

DAVID POYER’s sea career included service in the Atlantic, Mediterranean, Arctic, Caribbean, Pacific, and Pentagon. Deep War is the eighteenth novel in his widely popular series featuring Daniel V. Lenson. Poyer’s work has been required reading in the Literature of the Sea course at the U.S. Naval Academy, along with that of Joseph Conrad and Herman Melville, and he has received the Distinguished Award from the Surface Navy Association for his fiction. He lives on the Eastern Shore of Virginia.

"[An] unforgettable thriller...Poyer is at the top of his game in this all-too-plausible future war scenario." - Publishers Weekly, starred review

"Hair-raising [...] there's ample action for thriller readers, with terrific extended battle scenes on a grand scale, both on land and sea." - Kirkus

"Thrilling, filled with near-future technology, and deeply grounded in the human cost of war, David Poyer’s Deep War is a brilliant novel by an acknowledged master of military fiction." - The Real Book Spy

"An entertaining read, but it is also a training manual for potential conflicts in our near future." - Ammoland